Items related to The Poisonwood Bible: A Novel 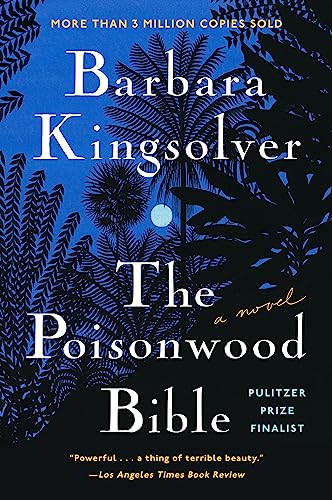 The Poisonwood Bible is a story told by the wife and four daughters of Nathan Price, a fierce, evangelical Baptist who takes his family and mission to the Belgian Congo in 1959. They carry with them everything they believe they will need from home, but soon find that all of it -- from garden seeds to Scripture -- is calamitously transformed on African soil. What follows is a suspenseful epic of one family's tragic undoing and remarkable reconstruction over the course of three decades in postcolonial Africa.

This P.S. edition features an extra 16 pages of insights into the book, including author interviews, recommended reading, and more.

Oprah Book Club® Selection, June 2000: As any reader of The Mosquito Coast knows, men who drag their families to far-off climes in pursuit of an Idea seldom come to any good, while those familiar with At Play in the Fields of the Lord or Kalimantaan understand that the minute a missionary sets foot on the fictional stage, all hell is about to break loose. So when Barbara Kingsolver sends missionary Nathan Price along with his wife and four daughters off to Africa in The Poisonwood Bible, you can be sure that salvation is the one thing they're not likely to find. The year is 1959 and the place is the Belgian Congo. Nathan, a Baptist preacher, has come to spread the Word in a remote village reachable only by airplane. To say that he and his family are woefully unprepared would be an understatement: "We came from Bethlehem, Georgia, bearing Betty Crocker cake mixes into the jungle," says Leah, one of Nathan's daughters. But of course it isn't long before they discover that the tremendous humidity has rendered the mixes unusable, their clothes are unsuitable, and they've arrived in the middle of political upheaval as the Congolese seek to wrest independence from Belgium. In addition to poisonous snakes, dangerous animals, and the hostility of the villagers to Nathan's fiery take-no-prisoners brand of Christianity, there are also rebels in the jungle and the threat of war in the air. Could things get any worse?

In fact they can and they do. The first part of The Poisonwood Bible revolves around Nathan's intransigent, bullying personality and his effect on both his family and the village they have come to. As political instability grows in the Congo, so does the local witch doctor's animus toward the Prices, and both seem to converge with tragic consequences about halfway through the novel. From that point on, the family is dispersed and the novel follows each member's fortune across a span of more than 30 years.

The Poisonwood Bible is arguably Barbara Kingsolver's most ambitious work, and it reveals both her great strengths and her weaknesses. As Nathan Price's wife and daughters tell their stories in alternating chapters, Kingsolver does a good job of differentiating the voices. But at times they can grate--teenage Rachel's tendency towards precious malapropisms is particularly annoying (students practice their "French congregations"; Nathan's refusal to take his family home is a "tapestry of justice"). More problematic is Kingsolver's tendency to wear her politics on her sleeve; this is particularly evident in the second half of the novel, in which she uses her characters as mouthpieces to explicate the complicated and tragic history of the Belgian Congo.

Despite these weaknesses, Kingsolver's fully realized, three-dimensional characters make The Poisonwood Bible compelling, especially in the first half, when Nathan Price is still at the center of the action. And in her treatment of Africa and the Africans she is at her best, exhibiting the acute perception, moral engagement, and lyrical prose that have made her previous novels so successful. --Alix Wilber

The Poisonwood Bible: A Novel Paperback