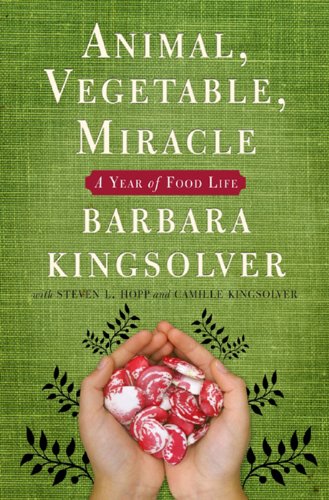 Author Barbara Kingsolver and her family abandoned the industrial-food pipeline to live a rural life—vowing that, for one year, they’d only buy food raised in their own neighborhood, grow it themselves, or learn to live without it. Part memoir, part journalistic investigation, Animal, Vegetable, Miracle is an enthralling narrative that will open your eyes in a hundred new ways to an old truth: You are what you eat.

When Barbara Kingsolver and her family moved from suburban Arizona to rural Appalachia, they took on a new challenge: to spend a year on a locally produced diet, paying close attention to the provenance of all they consumed. Concerned about the environmental, social, and physical costs of American food culture, they hoped to recover what they consider our nation’s lost appreciation for farms and the natural processes of food production. Since 2007, their experiment has evolved enormously. In this special anniversary edition, featuring a new epilogue by the entire Kingsolver family, they discuss how the project has grown. Not only have they incorporated their food values into all of their lives, but Steven now runs a farm-to-table restaurant and community development venture that trains young farmers in their area to move into sustainable food production.

With Americans’ growing worry about the toll of an industrial food system on their health and environment, the Kingsolver family’s experiences and observations remain just as relevant today as they were ten years ago. Animal, Vegetable, Miracle is a modern classic that will endure for years to come.

Barbara Kingsolver's work has been translated into more than twenty languages and has earned a devoted readership at home and abroad. She was awarded the National Humanities Medal, our country's highest honor for service through the arts. She received the 2011 Dayton Literary Peace Prize for the body of her work, and in 2010 won Britain's Orange Prize for The Lacuna. Before she made her living as a writer, Kingsolver earned degrees in biology and worked as a scientist. She now lives with her family on a farm in southern Appalachia.