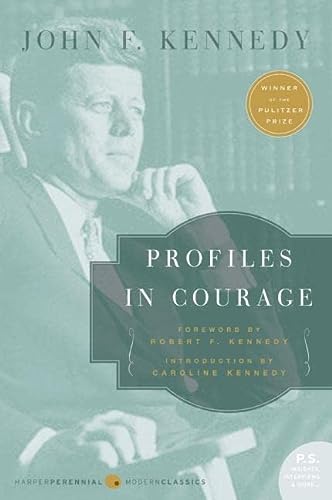 Written in 1955 by the then junior senator from the state of Massachusetts, John F. Kennedy's Profiles in Courage served as a clarion call to every American. The inspiring true accounts of eight unsung heroic acts by American patriots at different junctures in our nation's history, Kennedy's book became required reading, an instant classic, and was awarded the Pulitzer Prize. Now, a half-century later, it remains a moving, powerful, and relevant testament to the indomitable national spirit and an unparalleled celebration of that most noble of human virtues.

This special "P.S." edition of Profiles in Courage commemorates the fiftieth anniversary of the book's publication. Included in this new edition, along with vintage photographs and an extensive author biography, are Kennedy's correspondence about the writing project, contemporary reviews of the book, a letter from Ernest Hemingway, and two rousing speeches from recipients of the Profile in Courage Award.

John F. Kennedy (1917-1963) graduated from Harvard with honors in 1940 and served as a P. T. Boat Commander in the South Pacific during World War II. He was decorated twice by the Navy for the serious injuries he suffered when his boat was rammed in two while attacking a Japanese destroyer in the Solomons, and for "his courage, endurance and excellent leadership" in towing injured members of his crew to safety.

A writer and newspaperman, Kennedy in 1940 wrote Why England Slept, a best-selling analysis of England's unpreparedness for war, termed by the New York Times "a notable textbook for our times."

The son of Joseph P. Kennedy, former Ambassador to Great Britain, and the grandson of Boston's one-time Mayor and Congressman John F. Fitzgerald, Kennedy was elected to Congress in 1946 at the age of twenty-nine, and re-elected in 1948 and 1950. In 1952 he became the third Democrat ever elected to the Senate from Massachusetts, receiving the largest vote ever polled by a Senator in the history of the state. He was President of the United States from 1961 to 1963. He was the youngest man ever elected to the Oval Office and the first Roman Catholic President.

Excerpt. © Reprinted by permission. All rights reserved.:
(From the Epilogue by John Kennedy and Caroline Kennedy) All our lives, people approached us to say, "Your father changed my life." They go on to describe their own commitment to public service, community involvement, and work for social justice John F. Kennedy inspired one generation, and now others, to believe that politics can be a noble profession.

For President Kennedy, history was not a dull, dry subject, but came alive in the stories of people who risked their careers to stand up for what was right for our country, even when it was not the easy thing to do. Our father often used to say, "One man can make a difference, and every man should try." Of course, this applies to each of us, including women. Many people first learn how this is true by reading this book. The leaders of the past, like Daniel Webster, Henry Clay and Edmund G. Ross, have set a shining example for Americans today to live up to.

A few years ago, our family decided that the best way to honor John F, Kennedy would be to honor people who were continuing his work, who shared his vision for our country and his commitment to giving of themselves to make it a better place to live. We created the John F. Kennedy Profile in Courage Award to be awarded to elected officials who exemplify the kind of courage he wrote about.

At that time, some people said, "There are no courageous politicians today. You will never find anyone to receive the award." But they were wrong. We have learned that at all levels of government, in all parts of our country, across the political spectrum, they are there. As a society, we need to encourage people to choose public service as a career, and we need to celebrate them for standing on principle.

Interestingly, many of the stories in this book tell of courage in standing up against slavery around the time of the Civil War. More than one hundred years later, the struggle for civil rights goes on. The first two Profiles in Courage Award winners, and many other courageous Americans, prove that we must never stop fighting for what we believe is right. Our first recipient, Alabama Congressman Carl Elliott, fought for equal opportunity in education and was redistricted of his congressional seat in retaliation for his courageous and principled stand. Our second winner, Georgia Democratic Congressman Charles Weltner, took an oath to support his party's ticket in the upcoming fall election. When segregationist Lester Maddox won the preliminary and became the Democratic nominee for Governor of Georgia, Weltner followed his conscious and resigned from politics, rather than violate his oath, or belief that segregation was wrong.

Other winners include Congressman Mike Synar and Henry Gonzalez. They battled powerful special interest groups like the gun lobby, the tobacco lobby, and the banking industry, fighting instead for the individual citizens who sent them to Washington. Governor Jim Florio lost his re-election campaign after he passed the nation's toughest gun control law in New Jersey. Governor Lowell Weicker introduced Connecticut's first state income tax in spite of its unpopularity. Long-time teacher and school superintendent Corkin Cherubini won the Profile in Courage Award for fighting against a system which separated children on the basis of race rather than ability, in spite of the fact that his life was threatened by members of his community. Alabama Judge Charles Price was honored for upholding the separation of church and state by ruling that another judge's courtroom display of the ten commandments violated the First Amendment. And, when the armed and dangerous Freemen tried to take over a small Montana community, 1998 Profile in Courage Winner County Attorney Nickolas Murnion stood alone against them, upholding democracy and the rule of law.

Each of these men risked their careers to do what they believed was right, and often they risked their lives. We hope that each person who reads this book and learns about courageous people in public life will realize that when we face a difficult decision which is bound to be unpopular, we are not alone. Each of us must stand up for what we believe in and be willing to take the consequences, if we want to make our country a better place to live.

Excerpted from Profiles In Courage. Reprinted with permission by BD&L.

Profiles in Courage (Paperback or Softback)