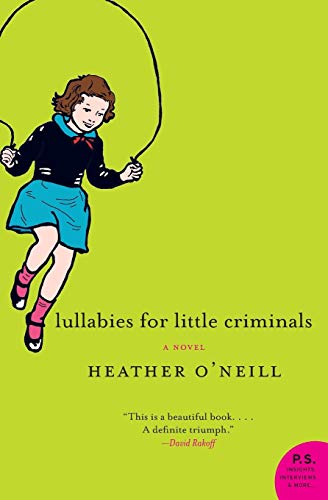 Heather O’Neill’s critically acclaimed debut novel, with a new introduction from the author to celebrate its ten-year anniversary

Baby, all of thirteen years old, is lost in the gangly, coltish moment between childhood and the strange pulls and temptations of the adult world. Her mother is dead; her father, Jules, is scarcely more than a child himself and is always on the lookout for his next score. Baby knows that “chocolate milk” is Jules’ slang for heroin and sees a lot more of that in her house than the real thing. But she takes vivid delight in the scrappy bits of happiness and beauty that find their way to her, and moves through the threat of the streets as if she’s been choreographed in a dance.

Soon, though, a hazard emerges that is bigger than even her hard-won survival skills can handle. Alphonse, the local pimp, has his eye on her for his new girl—and what the johns don’t take he covets for himself. If Baby cannot learn to become her own salvation, his dark world threatens to claim her, body and soul.

Channeling the artlessly affecting voice of her thirteen-year-old heroine with extraordinary accuracy and power, Heather O’Neill’s debut novel blew readers away when it was first published ten years ago. Now it’s sure to capture its next decade of readers as Baby picks her pathway along the edge of the abyss to arrive at a place of redemption, and of love.

Featuring a new introduction from the author

Praise for Lullabies for Little Criminals

“A vivid portrait of life on skid row.”—People

“A nuanced, endearing coming-of-age novel you won’t want to miss.”—Quill And Quire

“O’Neill is a tragicomedienne par excellence. . . . You will not want to miss this tender depiction of some very mean streets.”—Montreal Review of Books

A down-and-dirty debut novel, a harrowing recital of a young life, a funny, innocent, streetwise telling of life on the street--all of the above describe Heather O'Neill's Lullabies for Little Criminals. In an autobiographical essay included in the book, O'Neill, whose own childhood parallels rather closely the life of Baby, her book's heroine, says, "In Lullabies, I wanted to capture what I remembered of the drunken babbling of unfortunate twelve-year-olds: their illusions; their ludicrously bad choices, their lack of morality and utter disbelief in cause and effect." She accomplishes all of the above and more.

Baby is born to two 15-year-olds, and her mother dies a year later. Her father, Jules, is not a bad man, but he is a perpetual kid, without money, education, purpose, moral compass, or any idea of what being a parent is about or how ordinary people live. When the novel begins, Baby is almost 12, and her 12th year turns out to be a very big one indeed. She smokes pot, shoots heroin, loses her virginity, and lives in foster homes, a state detention home, and one seedy, squalid apartment after another. She comes under the spell of Alphonse, a neighborhood pimp, and is so hungry for male affection that she mistakes what he offers for love and care.

Baby and her equally neglected and abused friends long for adulthood, whatever that means. They look up to sophisticated druggies and efficient thieves. Baby says, "I don't know why I was upset about not being an adult. It was right around the corner. Becoming a child again is what is impossible. That's what you have a legitimate reason to be upset over." Baby is matter-of-fact about her predicament. She knows that other kids have lives very different from hers but says, "It never occurs to you when you are very young to need something other than what your parents have to offer to you." This poignant story is beautifully written, sprinkled throughout with humor, pathos, unbelievable privation, and, in the end, the hope of redemption. At least we know that Heather O'Neill grew up to be a writer of no mean accomplishment. --Valerie Ryan

Heather O’Neill is a Canadian novelist, short story writer, and essayist. Lullabies for Little Criminals, her debut novel, was published in 2006 to international critical acclaim and won CBC Canada Reads. It was short-listed for both the Governor General’s Award for Fiction and the Orange Prize for Fiction. She has since published the novel The Girl Who Was Saturday Night and the short story collection Daydreams of Angels, which were finalists for the Scotiabank Giller Prize in consecutive years. The collection was also short-listed for the Paragraphe Hugh MacLennan Prize for Fiction. Born and raised in Montreal, she lives there today with her daughter.

Book Description Paperback. Condition: New. Language: English. Brand new Book. A gritty, heart-wrenching novel about bruised innocence on the city's feral streets?the remarkable debut of a stunning literary talentHeather O'Neill dazzles with a first novel of extraordinary prescience and power, a subtly understated yet searingly effective story of a young life on the streets?and the strength, wits, and luck necessary for survival.At thirteen, Baby vacillates between childhood comforts and adult temptation: still young enough to drag her dolls around in a vinyl suitcase yet old enough to know more than she should about urban cruelties. Motherless, she lives with her father, Jules, who takes better care of his heroin habit than he does of his daughter. Baby's gift is a genius for spinning stories and for cherishing the small crumbs of happiness that fall into her lap. But her blossoming beauty has captured the attention of a charismatic and dangerous local pimp who runs an army of sad, slavishly devoted girls?a volatile situation even the normally oblivious Jules cannot ignore. And when an escape disguised as betrayal threatens to crush Baby's spirit, she will ultimately realize that the power of salvation rests in her hands alone. Seller Inventory # LIB9780060875077

Shipping: US$ 16.63
From United Kingdom to U.S.A.
Destination, rates & speeds