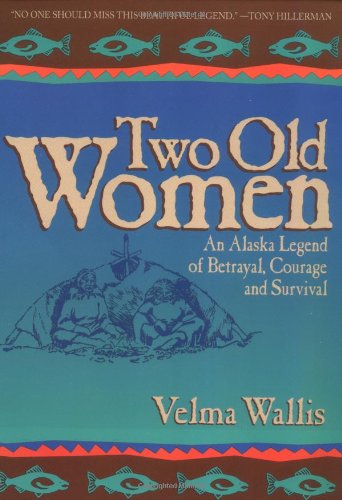 Based on an Athabascan Indian legend passed along for many generations from mothers to daughters of the upper Yukon River area in Alaska, this is the suspenseful, shocking, ultimately inspirational tale of two old women abandoned by their tribe during a brutal winter famine. Though these two women have been known to complain more than contribute, they now must either survive on their own or die truing. In simple but vivid detail, Velma Wallis depicts a landscape and way of life that are at once merciless and starkly beautiful. In her old women, she has created two heroines of steely determination whose story of betrayal, friendship,community, and forgiveness will carve out a permanent place in readers' imaginations.

Velma Wallis was born in 1960 in Fort Yukon, a remote village of about 650 people in Interior Alaska. Growing up in a traditional Athabaskan family, Wallis was one of thirteen children. When she was thirteen, her father died and she left school to help her mother raise her younger siblings.

Wallis later moved to her father's trapping cabin, a twelve-mile walk from the village. She lived alone there intermittently for a dozen years, learning traditional skills of hunting and trapping. An avid reader, she passed her high school equivalency exam and began her first literary project--writing down a legend her mother had told her, about two abandoned old women and their struggle to survive.

That story became her first book, Two Old Women, published by Epicenter Press in 1993. As her second book, Bird Girl and the Man who Followed the Sun, went to press, Wallis was living in Fort Yukon with her husband, Jeffrey John, and their two children. The family also spends time in the neighboring village of Venetie.

Enchanting retelling--and a 1993 Western States Book Award winner--of a tribal legend about two old women, left behind to die, who instead went on to survive and thrive. Wallis--one of 13 siblings with their roots in the Athabaskan tribe of Alaska--used to listen to her mother tell stories every night after the day's hard work was done. The story of the two old women was a favorite: In a winter of famine, the tribe decides to leave behind two elderly women, who although mobile and somewhat productive, complain constantly and require assistance. Some people are shocked and distressed, but no one, including the daughter of one of the women, speaks up, afraid of precipitating violence in the tribe. As the tribe marches off, the two women, 75 and 80 years old, vow they will ``die trying.'' They manage to catch a few rabbits and a squirrel to sustain them, then set off to a campsite miles away where, they recall, food is more abundant. They reach their goal, survive the winter, and spend the summer laying in a store of foodstuffs that will eventually sustain the whole tribe when it returns in search of them. Wallis recounts the tale here in simple but vivid detail, describing a life of unremitting labor in an extraordinary landscape. The story speaks to many modern concerns--abandonment or isolation of old men and women in nursing homes and retirement communities; the elderly's perhaps unwitting view of themselves as a privileged elite, but one which greatly underestimates its capabilities; the way in which the greatest good for the greatest number can lead to injustice and even cruelty, and in which trust, once broken, takes time and hard work to repair. Full of adventure, suspense, and obstacles overcome--an octogenarian version of Thelma and Louise triumphant. (Illustrations) -- Copyright ©1993, Kirkus Associates, LP. All rights reserved.