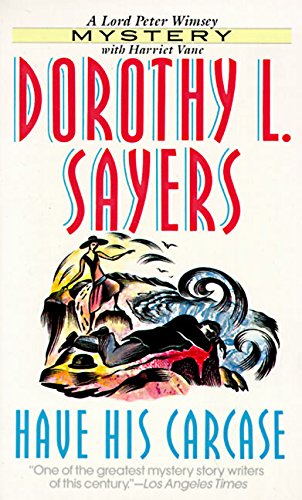 “The Wimsey books are literate and delightful mysteries.”
—Chicago Tribune

The great Dorothy L. Sayers is considered by many to be the premier detective novelist of the Golden Age, and her dashing sleuth, Lord Peter Wimsey, one of mystery fiction’s most enduring and endearing protagonists. Acclaimed author Ruth Rendell has expressed her admiration for Sayers’s work, praising her “great fertility of invention, ingenuity, and wonderful eye for detail.” The second Dorothy L. Sayers classic to feature mystery writer Harriet Vane, Have His Carcase is now back in print with an introduction by Elizabeth George, herself a crime fiction master. Harriet’s discovery of a murdered body on the beach before it is swept out to sea unites her once more with the indomitable Lord Peter, as together they attempt to solve a most lethal mystery, and find themselves become much closer than mere sleuthing partners in the process.

Dorothy L. Sayers was born in 1893. She was one of the first women to be awarded a degree by Oxford University, and later she became a copywriter at an ad agency. In 1923 she published her first novel featuring the aristocratic detective Lord Peter Wimsey, who became one of the world's most popular fictional heroes. She died in 1957.