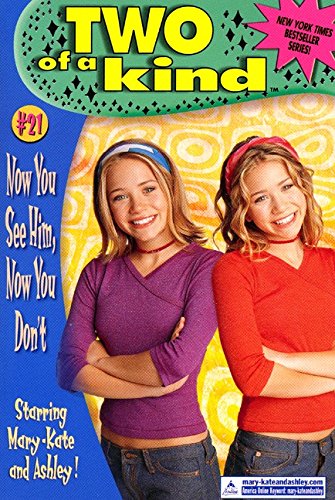 Mary-Kate and Ashley have great tricks ready for the Harrington magic show. They're sure to be a hit! But before show time, Ashley's partner leaves her trapped in a box and Mary-Kate's mind-reading horse disappears. The girls are going to need some real magic to get out of this one!

Mary-Kate and Ashley have been celebrities since the day when, at the age of nine months, they joined the cast of the hit sitcom "Full House" in their shared role as Michelle. Each of Mary-Kate and Ashley's 14 years since has witnessed the outstanding expansion of their popularity...their fans have literally grown up alongside the twins! First in television and feature films, Mary-Kate and Ashley now appear in videos, music, interactive software, fashion dolls and accessories, and more. Their latest ventures include launching their official website and debuting a line of licensed fashion clothing, as well as their very own magazine in spring 2001.

Mary-Kate & Ashley books launched in 1990, and today the various book series continue to grow to reflect the ever-evolving lifestyles of kids, 'tweens, and teens. HarperEntertainment and Parachute Publishing release twenty-five books a year and have sold more than 30 million copies. Mary-Kate and Ashley's two book series Two of a Kind and The New Adventures of Mary Kate and Ashley are frequent USA Today bestsellers. And Mary-Kate & Ashleynovelties, such as Wall Calendars, a Mood Diary, a Be My Valentinecard-making kit, and the movie tie-in series, Starring-In continue to be hugely popular.

The growth of the Mary-Kate & Ashley brand has afforded Parachute and Harper the opportunity to work with companies such as Acclaim Entertainment, Mattel Inc., Warner Home Video, Kid Rhino, Lightyear Entertainment, Sail with the Stars on cross-promotional and cross-merchandise projects, including a very special, book-dedicated area on mary-kateandashley.com -- Now Read This!