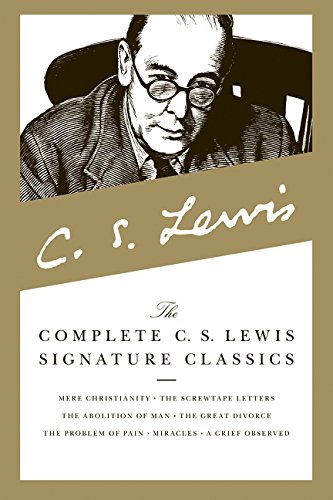 For the first time ever, these essential volumes by one of the most celebrated literary figures of our time will be available in one deluxe paperback edition. Praise for C. S. Lewis: 'I read Lewis for comfort and pleasure many years ago, and a glance into the books revives my old admiration.'--John Updike 'If wit, and wisdom, style and scholarship are requisites to passage through the pearly gates, Mr. Lewis will be among the angels.' --The New Yorker 'Lewis, perhaps more than any other twentieth-century writer, forced those who listened to him and read his works to come to terms with their own philosophical presuppositions.' -- Los Angeles Times

A beautiful compilation of inspirational writings, featuring seven classic works in one volume:

C. S. Lewis's works continue to attract thousands of new readers every year, appealing to those seeking wisdom and calm in a hectic and ever-changing world. Each title is written with the lucidity, warmth, and wit that has made Lewis revered as a writer the world over.

From The Problem of Pain—a wise and compassionate exploration of suffering—to the darkly satirical The Screwtape Letters, Lewis is unrivalled in his ability to disentangle the questions of life. His writings offer hope, wisdom, and a true understanding of human nature.

Clive Staples Lewis (1898-1963) was one of the intellectual giants of the twentieth century and arguably the most influential Christian writer of his day. He was a Fellow and Tutor in English literature at Oxford University until 1954, when he was unanimously elected to the Chair of Medieval and Renaissance English at Cambridge University, a position he held until his retirement. His major contributions in literary criticism, children's literature, fantasy literature, and popular theology brought him international renown and acclaim. He wrote more than thirty books, allowing him to reach a vast audience, and his works continue to attract thousands of new readers every year. His most distinguished and popular accomplishments include, The Chronicles of Narnia, Out of the Silent Planet, The Four Loves, The Screwtape Letters, and Mere Christianity. Visit the C.S. Lewis website at www.cslewis.com.