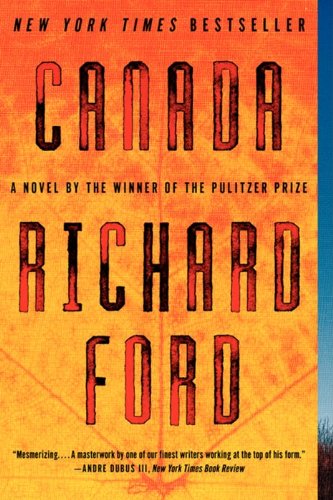 "First, I’ll tell about the robbery our parents committed. Then the murders, which happened later.”

So begins Canada, the unforgettable story of a boy attempting to find grace, written by the only writer in history to win both the Pulitzer Prize and Pen/Faulkner Award for a single novel.

This is the story of Dell Parsons, whose parents rob a bank and fracture his life into a before and an after, crossing the threshold that cannot be uncrossed.  After his parents’ arrest and imprisonment, Del and Berner, his twin sister, face a blank future of foster care and social services visits. Berner, willful and burning with anger, runs away – orphaning Del completely.

In the midst of his abandonment, a family friend intervenes, spiriting Del across the Montana/Saskatchewan border. There, in a dilapidated town floating in the sea of the Canadian prairie, he’s taken in by Arthur Remlinger – an enigmatic, charismatic man whose own past exists on the other side of a similarly uncrossable border.

Undone by the calamity of his parents’ robbery, Del struggles under the vastness of the prairie sky and the stark, unforgiving landscape to realign his sense of self and his perception of the parents he thought he knew, even as he moves on an inexorable collision course with the slow-simmering violence trembling just beneath Arthur Remlinger’s cool reserve.

A resonant and luminous masterwork of haunting and spectacular vision, CANADA is an elemental novel of boundaries traversed, innocence lost, and of the mysterious and powerful bonds of family. Told in spare, elegant prose but rich with emotional clarity, lyrical precision, and an acute sense of the grandeur of living, it is a masterpiece from one of the greatest American writers alive.

When fifteen-year-old Del Parsons' parents rob a North Dakota bank, his normal life is altered forever, and a threshold is crossed that can never be uncrossed. His parents' imprisonment threatens a turbulent and uncertain future for Del and his twin sister, Berner. Fierce with resentment, Berner flees their Montana home for California. But Del is not completely abandoned. A family friend spirits him across the Canadian border toward safety and a better life. There, afloat on the Saskatchewan prairie, Del finds only cold refuge from Arthur Remlinger, an enigmatic and alluring American fugitive with a dark and violent past.

Undone by the calamity of his parents' robbery, Del struggles to remake himself. But his search for grace only moves him nearer to a harrowing and murderous collision with the forces of darkness that shadow us all.

A true masterwork of haunting and spectacular vision from one of our greatest writers, Canada is a profound novel of boundaries traversed, innocence lost and reconciled, and the mysterious and consoling bonds of family. Told in spare, elegant prose, both resonant and luminous, it is destined to become a classic.

Richard Ford is the author of The Sportswriter and Independence Day. He is winner of the Prix Femina in France, the 2019 Library of Congress Prize for American Fiction, and the Princess of Asturias Award in Spain.  He is also the author of the New York Times bestseller Canada.  His story collections include the bestseller Let Me Be Frank with You, Rock Springs, and A Multitude of Sins.  He lives in Boothbay, Maine, with his wife, Kristina Ford.