Items related to The 50th Law 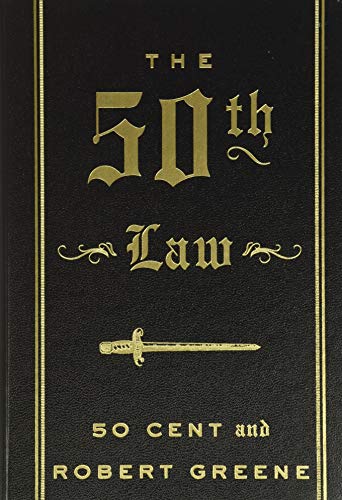 In The 50th Law, hip hop and pop culture icon 50 Cent (aka Curtis Jackson) joins forces with Robert Greene, bestselling author of The 48 Laws of Power, to write a “bible” for success in life and work based on a single principle: fear nothing. With stories from 50 Cent's life on the streets and in the boardroom as he rose to fame after the release of his album Get Rich or Die Tryin’, as well as examples of others who have overcome adversity through understanding and practicing the 50th Law, this deeply inspirational book is perfect for entrepreneurs as well as anyone interested in the extraordinary life of Curtis Jackson.

A hip hop icon joins forces with the best-selling author of The 48 Laws of Power to write a bible for success in life and work living by one simple principle: fear nothing.

Curtis James Jackson III (born July 6, 1975), better known by his stage name 50 Cent, is an American rapper. He rose to fame with the release of his albums Get Rich or Die Tryin (2003) and The Massacre (2005). Both albums achieved multi-platinum success, selling over twenty-one million copies combined. He is the author of From Pieces to Weight: Once Upon a Time in Southside Queens (S&S, 2006). He lives in New York.

Robert Greene is the author of three bestselling books: The 48 Laws of Power, The Art of Seduction, and The 33 Strategies of War. He attended U.C. Berkeley and the University of Wisconsin at Madison, where he received a degree in classical studies. He has worked in New York as an editor and writer at several magazines, including Esquire, and in Hollywood as a story developer and writer. Greene has lived in London, Paris, and Barcelona; he speaks several languages and has worked as a translator. He currently lives in Los Angeles.