Items related to Badasses: The Legend of Snake, Foo, Dr. Death, and... 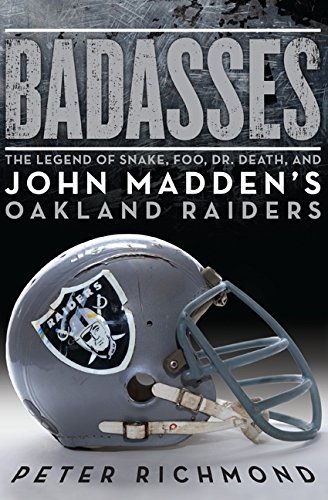 A book that explores the enduring legends of Snake, Foo, Dr. Death, and John Madden’s Oakland Raiders, Badasses is the definitive biography of arguably the last team to play old-fashioned tough-guy football. Peter Richmond, co-author of the New York Times bestseller The Glory Game, offers a fascinating look at the 1970s Oakland Raiders, led by colorful greats from another era: Ken Stabler, Willie Brown, Gene Upshaw, Jim Otto, Art Shell, head coach John Madden, and owner Al Davis. In the bestselling vein of Boys Will Be Boys, Badasses chronicles the bar-room exploits, practice-field pranks, and Super Bowl glories of the team’s many misfits, cast-offs, psychos, and geniuses of the game.

They were the NFL's ultimate outlaws, black-clad iconoclasts who, with a peculiar mix of machismo and brotherhood, of postgrad degrees and firearms, merrily defied pro football corporatism.

The Oakland Raiders of the 1970s were some of the most outrageous, beloved, and violent football teams ever to play the game. In this rollicking biography, Peter Richmond tells the story of Oakland's wrecking crew of castoffs, psychos, oddballs, and geniuses who won six division titles and a Super Bowl championship under the brilliant leadership of coach John Madden and eccentric owner Al Davis.

Richmond goes inside the locker room and onto the field with Ken Stabler, Willie Brown, Fred Biletnikoff, George Atkinson, Phil Villapiano, and the rest of this band of brothers who made the Raiders legendary. He vividly recounts days of grueling practices and hell-raising nights of tavern crawling—from smoking pot and hiring strippers during training camp to sharing game-day beers with their hardcore fans (including the Bay Area's other badasses, the Black Panthers and the Hells Angels). Richmond reveals a group of men who, after years of coming up short in the AFC Championship game, saw their off-kilter loyalty to the black and silver finally pay off with their emphatic Super Bowl victory in 1977. Funny, raunchy, and inspiring, Badasses celebrates the '70s Raiders as the last team to play professional football the way it was meant to be played: down and very dirty.

Peter Richmond is the author of four other books, including The Glory Game (with Frank Gifford). His writing has appeared in The New Yorker, Vanity Fair, Rolling Stone, the New York Times Magazine, and GQ. He lives with his wife in Dutchess County, New York.