Items related to Heroes for My Son

Meltzer, Brad Heroes for My Son

Heroes for My Son 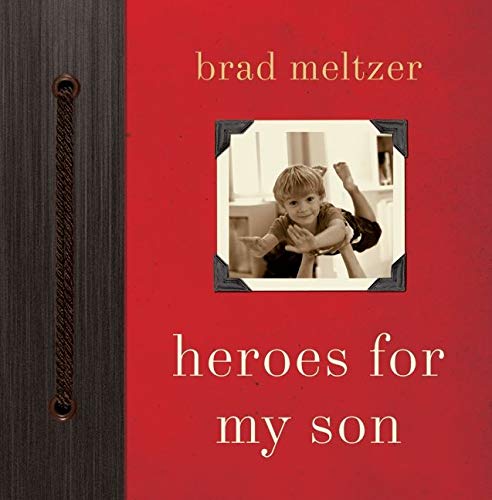 Since the birth of his son in 2003, bestselling novelist Brad Meltzer (The Book of Fate, The Tenth Justice, The Book of Lies) has been collecting heroes from whom his son can learn how to live a good life. In Heroes for My Son, Meltzer shares, with parents everywhere, the stories of 52 such heroes—from Dr. Seuss and Mr. Rogers to Mother Theresa and Mohandas Gandhi.

Questions for Brad Meltzer on Heroes for My Son

Q: As an idea, where did Heroes for My Son come from?
A: It began the night my first son was born. I was stuck at a red light, and I remember looking up at the black sky and thinking of this baby boy we were just blessed with. That’s when I asked myself the question for the very first time: What kind of man did I want my son to be? I have three children now. I've long ago realized I have little say in the matter. But at that moment, I decided that I wanted to write a book over the course of my son's life--and then when I eventually gave it to him, he’d realize what a brilliant father I was. I'd assumed Norman Rockwell would of course be resurrected to paint the moment, because it would be that perfect.

But the book was just a list of silly platitudes--until a friend of mine told me this story about the Wright Brothers: Every day Orville and Wilbur Wright went out to fly their plane, they would bring enough materials for multiple crashes. That way, when they crashed, they could rebuild the plane and try again. Think about it a moment: every time they went out--every time--they knew they were going to fail. But that's what they did: Crash and rebuild. Crash and rebuild. And that's why they finally took off.

I loved that story. I still love that story. And that's the kind of story I wanted my son to hear: a story that wouldn't lecture to him, but would show him that if he was determined ... if he wasn't afraid to fail ... if he had persistence (and a side order of stubbornness), the impossible becomes possible.

Since that time, I've been collecting heroes for this book, which has been one of the most rewarding projects of my life.

Q: Who were some of your heroes growing up?
A: My Mom and my grandfather. After them, Jim Henson and Mr. Rogers always led the list. Sure, there are tons of others in the book--from Rosa Parks, to Gandhi, to Muhammad Ali--but Jim Henson and Mr. Rogers just always had the biggest impact on me. Maybe it was their kindness. Maybe it was Kermit and that idea of "making millions of people happy." Maybe it was just my obsession with idealistic puppets. But the idea of being the top of your game--at the cutting-edge of entertainment--and you can do anything, but instead, you give all of that to children's public television ... ? Yes. My heroes.

Q: Who were some of the people who didn't make the book?
A: Mussolini. And Hitler. No question, Hitler was at the top of the list of people we didn't want in the book. But as for people that were actually close to making it, it's hard. Especially when you're looking at people who are still alive. I mean, with one bad news day, even the biggest hero can suddenly become Tiger Woods (who I will say was never in the running for being in the book). And the last thing I want is to have someone like that in a book for my sons. Of course, there were other heroes like Winston Churchill, Susan B. Anthony, and Benjamin Franklin--some of whom we ran out of space for, and some who I saved for the book I'm doing for my daughter.

Q: What do you think is the overall message of the book?
A: There's a line I just wrote for my next novel. It says: History doesn't just pick people. History picks everyone. Every day. The only question is, do you pay attention ... do you put in the hard work ... do you hear that calling? Yes, I know that sounds all new age-y. And I'm not new age-y. I just believe in hard work and regular people. That's how every great historic change takes place.

Q: How was writing nonfiction different from fiction?
A: I have to say, it's far easier to make stuff up. But there's also nothing more inspiring than knowing the story really happened.

Q: The book uses a lot of photos, was there anything you found in the photographs of these heroes that influenced the book?
A: I was amazed when John Lennon's people said they didn't like the photo we picked (we didn't change it). And when we unearthed the Mr. Rogers photo, which hasn't been seen by the public in decades. I just love that shot.

Q: If you had to pick one quote from the book, what is your favorite quote?
A:There are two:

"In a gentle way, you can shake the world."--Gandhi

"Not everyone is nice like that."--The receptionist in my Mom's doctor's office, when she heard my Mom had died from breast cancer. Always remember: The truth is what people say behind your back.

Q: What is going on with the Heroes for My Son blog and on Facebook? What are you doing there?
A: Finding more heroes. People send us new ones every day. I love sharing them with the world. If you have one, please send him or her along.

Q: Is there another book we can look forward to after Heroes for My Son?
A: I have a daughter. I've been working on hers since the day she was born (let it be known she asks every day, "Where’s my book?"). So Heroes for My Daughter is coming soon.

When Brad Meltzer's first son was born eight years ago, the bestselling writer and new father started compiling a list of heroes whose virtues and talents he wanted to share with his son: Abraham Lincoln, Rosa Parks, Jim Henson, Amelia Earhart, Muhammad Ali . . . and so many more, each one an ordinary person who was able to achieve the extraordinary. The list grew to include the fifty-two amazing people now gathered in Heroes for My Son, a book that parents and their children—sons and daughters alike—can now enjoy together as they choose heroes of their own.

From the Wright Brothers, who brought extra building materials to every test flight, planning ahead for failure, to Miep Gies, who risked her life to protect Anne Frank and her family from the Nazis during World War II, Heroes for My Son brings well-known figures together with less famous ones, telling the inspiring, behind-the-scenes stories of the moment that made them great. They are a miraculous group with one thing in common: each is an example of the spectacular potential that can be found in all of us.

Heroes for My Son is an unforgettable book of timeless wisdom, one that families everywhere can share again and again.

1. Heroes for My Son

2. Heroes for My Son

3. Heroes for My Son

4. Heroes for My Son

5. Heroes for My Son

6. Heroes for My Son

7. HEROES FOR MY SON

8. HEROES FOR MY SON

9. Heroes for My Son (Hardback)

Book Description HarperCollins Publishers Inc, United States, 2010. Hardback. Condition: New. New. Language: English. Brand new Book. Since the birth of his son in 2003, bestselling novelist Brad Meltzer (The Book of Fate, The Tenth Justice, The Book of Lies) has been collecting heroes from whom his son can learn how to live a good life. In Heroes for My Son, Meltzer shares, with parents everywhere, the stories of 52 such heroes--from Dr. Seuss and Mr. Rogers to Mother Theresa and Mohandas Gandhi. Seller Inventory # BTE9780061905285

Book Description HarperCollins Publishers Inc, United States, 2010. Hardback. Condition: New. New. Language: English. Brand new Book. Since the birth of his son in 2003, bestselling novelist Brad Meltzer (The Book of Fate, The Tenth Justice, The Book of Lies) has been collecting heroes from whom his son can learn how to live a good life. In Heroes for My Son, Meltzer shares, with parents everywhere, the stories of 52 such heroes--from Dr. Seuss and Mr. Rogers to Mother Theresa and Mohandas Gandhi. Seller Inventory # AAC9780061905285