Items related to Kiss of the Bees (Walker Family Mysteries, 2)

Jance, J. A Kiss of the Bees (Walker Family Mysteries, 2) 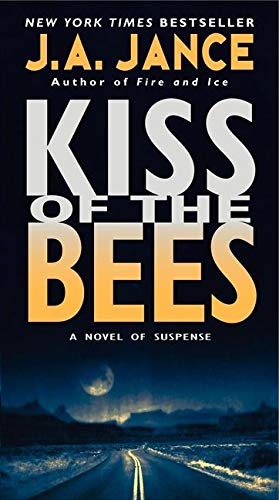 From critically acclaimed master of suspense J. A. Jance, the New York Times bestselling author of Fire and Ice, comes a nerve-shattering tale of rage and retribution, and a nightmare even death cannot end.

Twenty years ago, a darkness rose up out of the blistering heat of the Arizona desert and descended upon the Walker family of Tucson.

A personified evil, a serial killer named Andrew Carlisle, brought blood and terror into the Walkers' world, nearly murdering Diana Ladd Walker and her young son, Davy. Now much has changed. The family has grown larger.

There's Lani, the beloved adopted daughter—a beautiful Native-American teenager "kissed by the bees" and destined, according to Tohono O'odham lore, to become a woman of great spiritual power. And now the psychopath Carlisle has died in prison, so Brandon and Diana Walker believe they and their loved ones are safe at last.

The monster is dead, but his malevolence lives on . . . in another.

J. A. Jance is the New York Times bestselling author of the J. P. Beaumont series, the Joanna Brady series, the Ali Reynolds series, and five interrelated thrillers about the Walker family, as well as a volume of poetry. Born in South Dakota and brought up in Bisbee, Arizona, Jance lives with her husband in Seattle, Washington, and Tucson, Arizona.

They say it happened long ago that the whole world was covered with water. I'itoi---Elder Brother---was floating around in the basket which he had made. After a time, Great Spirit came out of his basket and looked around. Everything was still covered with water, so I'itoi made himself larger and larger until shuhthagi---the water---reached only to his knees.

Then, while I'itoi was walking around in the water, he heard someone call. At first he paid no attention, but when the call came the fourth time, Elder Brother went to see who was shouting. And so I'itoi found Jeweth Mahkai---Earth Medicine Man---rejoicing because he was the first one to come out of the water.

Elder Brother said, "This is not true." He explained that he himself was first, but Jeweth Mahkai was stubborn and insisted that he was first.

Now I'itoi and Earth Medicine Man, as they were talking, were standing in the south. They started toward the west. As they were going through the water---because there was as yet very little land---they heard someone else shouting.

Ban---Coyote---was the one who was making all the noise. I'itoi went toward the sound, but Elder Brother went one way, and Ban went another. And so they passed each other. Coyote was shouting that he was the very first one out of the water and that he was all alone in the world.

I'itoi called to Ban, and at last they came together. Elder Brother explained to Coyote that he was not the first. And then the three---Great Spirit, Earth Medicine Man, and Coyote---started north together. As they went over the mud, I'itoi saw some very small tracks.

Elder Brother said, "There must be somebody else around." Then they heard another voice calling. It was Bitokoi---Big Black Beetle---which the Mil-gahn, the Whites, call stinkbug. Bitokoi told I'itoi that he was the very first to come out of the water. I'itoi did not even bother to answer him.

And then the four---Elder Brother, Earth Medicine Man, Coyote, and Big Black Beetle---went on together toward the east because, as you remember, nawoj, my friend, all things in nature go in fours.

Dolores Lanita Walker's slender brown legs glistened with sweat as she pumped the mountain bike along the narrow strip of pavement that led from her parents' house in Gates Pass to the Arizona Sonora Desert Museum several miles away. Lani wasn't due at her job at the concession stand until 9 A.M., but by going in early she had talked her way into being allowed to help with some of the other duties.

About a mile or so from the entrance, she came upon the artist with his Subaru wagon parked off on the side of the road. He had been there every morning for a week now, standing in front of an easel or sitting on a folding chair, pad in hand, sketching away as she came whizzing past with her long hair flying out behind her like a fine black cape. In the intervening days they had grown accustomed to seeing one another.

The man had been the first to wave, but now she did, too. "How's it going?" he had asked her each morning after the first one or two.

"Fine," she'd answer, pumping hard to gain speed before the next little lump of hill.

"Come back when you can stay longer," he'd call after her. Lani would grin and nod and keep going.

This morning, though, he waved her down. "Got a minute?" he asked.

She pulled off the shoulder of the road. "Is something the matter?" she asked.

"No. I just wanted to show you something." He opened a sketch pad and held it up so Lani could see it. The picture took her breath away. It was a vivid color-pencil drawing of her, riding through the sunlight with the long early-morning shadows stretching out before her and with her hair floating on air behind her.

"That's very good," she said. "It really does look like me."

Lani stood for a moment studying the picture. Her parents' twentieth wedding anniversary was coming up soon, in less than a week. Instinctively she knew that this picture, framed, would make the perfect anniversary present for them.

"How much would it cost to buy something like this?" she asked, wondering how far her first paycheck from the museum would stretch.

Lani looked away, masking her disappointment with downcast eyes. "But I might consider trading for it," he added a moment later.

Lani brightened instantly. "Trading?" she asked. "Really?" But then disappointment settled in again. She was sixteen years old. What would she have to trade that this man might want?

"You're an Indian, aren't you?" he asked. Shyly, Lani nodded. "But you live here. In Tucson, I mean. Not on a reservation. "

Lani nodded again. It didn't seem necessary to explain to this man that she was adopted and that her parents were Anglos. It was none of his business.

"I've tried going out to the reservation to paint several times," he told her, "but the people seem to be really suspicious. If you'd consider posing for me, just for half an hour or so some morning, I'd give you this one for free."

Lani didn't have to think very long. "When would you like to do it?" she asked.

"That would work," Lani said, "but I'd have to come by about half an hour earlier than this, otherwise I'll be late for work."

Lani, getting back on her bike, paused and gave him a questioning look. "What's that?"

"Could you wear something that's sort of . . . well, you know"---he shrugged uncomfortably---"something that looks Indian?"

2. Kiss of the Bees (Paperback)

Book Description Paperback. Condition: New. Reprint. Language: English. Brand new Book. From critically acclaimed master of suspense J. A. Jance, the New York Times bestselling author of Fire and Ice, comes a nerve-shattering tale of rage and retribution, and a nightmare even death cannot end.Twenty years ago, a darkness rose up out of the blistering heat of the Arizona desert and descended upon the Walker family of Tucson.A personified evil, a serial killer named Andrew Carlisle, brought blood and terror into the Walkers' world, nearly murdering Diana Ladd Walker and her young son, Davy. Now much has changed. The family has grown larger.There's Lani, the beloved adopted daughter--a beautiful Native-American teenager kissed by the bees and destined, according to Tohono O'odham lore, to become a woman of great spiritual power. And now the psychopath Carlisle has died in prison, so Brandon and Diana Walker believe they and their loved ones are safe at last.They are wrong.The monster is dead, but his malevolence lives on . . . in another. Seller Inventory # BZE9780061945397