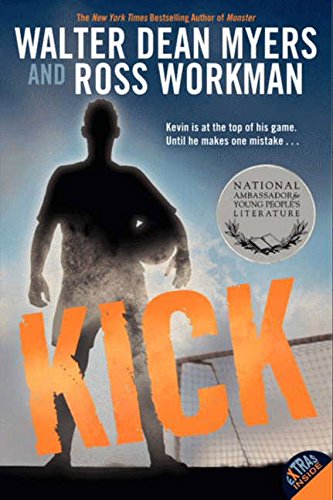 For the very first time in his decades-long career writing for teens, acclaimed and beloved author Walter Dean Myers writes with a teen, Ross Workman.

Kevin Johnson is a great kid and skilled soccer player. With attitude.

Then he ends up in jail.

Sergeant Brown is a tough cop and Kevin's mentor.

If Kevin and Brown can learn to trust each other, they might be able to turn things around.

Before it's too late.

Walter Dean Myers was the New York Times bestselling author of Monster, the winner of the first Michael L. Printz Award; a former National Ambassador for Young People's Literature; and an inaugural NYC Literary Honoree. Myers received every single major award in the field of children's literature. He was the author of two Newbery Honor Books and six Coretta Scott King Awardees. He was the recipient of the Margaret A. Edwards Award for lifetime achievement in writing for young adults, a three-time National Book Award Finalist, as well as the first-ever recipient of the Coretta Scott King-Virginia Hamilton Award for Lifetime Achievement.

When Ross Workman was thirteen, he wrote a fan email to his favorite author. When Walter Dean Myers wrote back and asked him whether he would be interested in writing a book, Ross was amazed—and incredibly excited. Four years later, Ross is seventeen and in eleventh grade. In addition to writing, Ross plays a sport every season: high school soccer in the fall, high school wrestling in the winter, and club travel soccer in the spring. He lives in New Jersey.

Gr 6-9-In an interesting joint effort, Myers teamed with high school student Workman to produce this novel about a soccer player who runs into trouble helping a friend. Veteran police sergeant Jerry Brown is asked to look into the case of a 13-year-old boy who crashed a car belonging to his friend's father. Brown takes a special interest in the case when he is informed that the boy, Kevin Johnson, is the son of an officer who was killed in the line of duty. As Brown delves more deeply, he begins to suspect that the friend's family has something to hide. He also develops a bond with Kevin, who, although angry and troubled, is basically kindhearted and well-intentioned. Workman wrote the chapters narrated by the boy, and Myers wrote those narrated by Brown. This approach works quite well in terms of narrative voice, as Myers's more polished style reflects an adult perspective, while Workman's less-refined prose seems appropriate to his character's outlook and experience. There is some exciting soccer action, and the interaction between Brown and Kevin is heartwarming, yet natural and unforced. While some may feel that the denouement falls a little flat, the novel should have wide appeal to soccer fans, aspiring writers, and boys from difficult family circumstances who are trying to figure out how to make their way in the world.-Richard Luzer, Fair Haven Union High School, VT (c) Copyright 2010. Library Journals LLC, a wholly owned subsidiary of Media Source, Inc. No redistribution permitted.

Book Description Paperback. Condition: New. Reprint. Language: English. Brand new Book. For the very first time in his decades-long career writing for teens, acclaimed and beloved author Walter Dean Myers writes with a teen, Ross Workman.Kevin Johnson is a great kid and skilled soccer player. With attitude.Then he ends up in jail.Sergeant Brown is a tough cop and Kevin's mentor. With attitude.If Kevin and Brown can learn to trust each other, they might be able to turn things around.Before it's too late. Seller Inventory # BZE9780062004918