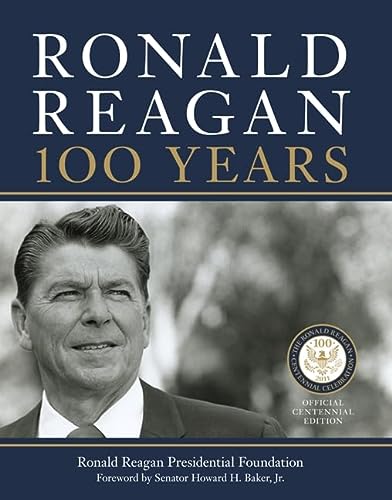 Ronald Reagan: 100 Years is the official centennial publication from the Ronald Reagan Presidential Foundation. Featuring archival photographs of the Reagan family along with insightful text, this book is the ultimate commemorative edition to mark the one hundredth anniversary of President Reagan’s birth. It offers an intimate, insider’s glimpse of the life and legacy of America’s most beloved leader.

February 6, 2011, marks the one hundredth anniversary of Ronald Reagan's birth. Known as "the Great Communicator," Ronald Reagan combined the best of small-town values and remarkable virtues with the eloquence and charm that came from a life spent in the public eye. From his early days, Reagan was a leader, whether saving lives as a lifeguard or demonstrating for students' rights as a college undergraduate. His career as a sports broadcaster and later as a leading man in Hollywood paved the way for a career in politics. As governor of California, Reagan earned the respect of world leaders and the American public. But it was as president of the United States that his strength of character, leadership, and love of country were best displayed. His eight years in the Oval Office ushered in remarkable change domestically and brought international peace, prosperity, and freedom.

A visual celebration of all that is Ronald Reagan, Ronald Reagan: 100 Years is the official centennial publication for the Ronald Reagan Presidential Foundation. Inspiring and uplifting, it is a fitting homage to one of America's greatest legends. A foreword by former Senator Howard H. Baker, Jr., distinguished politician and personal friend of the Reagans, completes this handsome volume, making it a must-have nostalgic tribute to the life and times of the man who led our nation and inspired the world.

Located in Simi Valley, California, the Ronald Reagan Presidential Library is one of the most visited presidential libraries in America and serves as the final resting place of America's fortieth president.