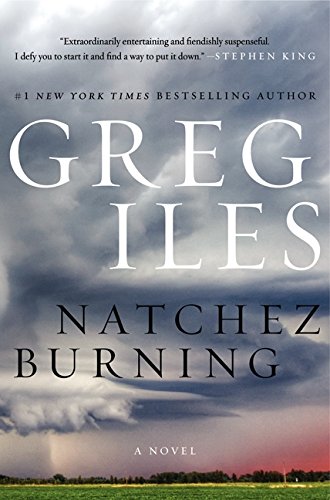 Raised in the southern splendor of Natchez, Mississippi, Penn Cage learned all he knows of duty from his father, Dr. Tom Cage. But now the beloved family doctor has been accused of murdering the African American nurse with whom he worked in the dark days of the 1960s. Once a crusading prosecutor, Penn is determined to save his father, but Tom, stubbornly invoking doctor-patient privilege, refuses even to speak in his own defense.

Penn's quest for the truth sends him deep into his father's past, where a sexually charged secret lies. More chilling, this long-buried sin is only one thread in a conspiracy of greed and murder involving the vicious Double Eagles, an offshoot of the KKK controlled by some of the most powerful men in the state. Aided by a dedicated reporter privy to Natchez's oldest secrets and by his fiancée, Caitlin Masters, Penn uncovers a trail of corruption and brutality that places his family squarely in the Double Eagles' crosshairs.

With every step costing blood and faith, Penn is forced to confront the most wrenching dilemma of his life: Does a man of honor choose his father or the truth?

An Amazon Best Book of the Month, May 2014: Greg Iles has written a sprawling, gothic, suspenseful, emotional, page-turner of a book. In doing so, he’s confronted the darkest secrets of his home state of Mississippi. Shifting between the 1960s (not a pretty period in Mississippi history) and the present, it’s the story of a respected doctor accused of murdering his former nurse, an African-American woman who has returned to Natchez after many years up north. The doctor’s son, Penn Cage (featured in previous Iles novels), is a former prosecutor, now the mayor of Natchez, whose attempts to clear his father bring him face to face with a fringe KKK sect, men who personify the South’s historic evils. Packed to the point of overflow with racial politics, family secrets, illicit love, corruption, racism, brutality, and fear, this 800-page book is really a father-son story. Yet, as Iles suggests in the opening pages: “Perhaps we expect too much of our fathers.” Though it’s sometimes easier not to acknowledge life’s most uncomfortable truths, as one character puts it, “Sooner or later, everything comes to the surface, doesn’t it?” Smart, funny, and sexy, you’ll keep thinking about it long after the violent final pages. --Neal Thompson

Greg Iles’s long-awaited new novel is a big deal, and I do mean big. In this age of 140-character tweets and text messages, there’s something wonderfully old-fashioned about the pleasure of losing yourself in the fully realized, immersive fictional world of a 788-page story. I’m reminded of Larry McMurtry’s Lonesome Dove (945 pages), or the great sagas of Herman Wouk, James Michener, and James Clavell. The best big novels, like Iles’s instant classic, Natchez Burning, pull you in so deep that you’re utterly transported; they don’t seem long at all.

I’ve always been a big fan of Greg Iles’ work. From Spandau Phoenix to Turning Angel, and his most recent, The Devil’s Punchbowl (just to name a few favorites), he never repeats himself. He’s a graceful writer who knows how to tell a gripping, fast-moving story—without sacrificing texture or fully fleshed-out characters.

The central plot of Natchez Burning starts with Mayor Penn Cage, an attorney Iles introduced in 1999’s The Quiet Game, learning that his father, the town’s most beloved physician, is about to be charged with murder. The victim? Dr. Cage’s former nurse, Viola Turner, who came home to Natchez to die after a nearly 40-year absence.

Did his father assist in Viola’s suicide? Penn would believe it: his father did the same for Penn’s own wife when she was dying of cancer, years before. But as the town’s corrupt district attorney pursues the case, it becomes clear that Viola’s death was no gentle passage into that good night. In fact, a crusading local reporter has video evidence that Viola died in pain and fear. Penn refuses to believe his father had anything to do with that.

Iles weaves this multi-generational web like a master, keeping Penn Cage at the center even as we see his father, Dr. Tom Cage, in both past and present, along with the many citizens of Natchez and its sister community in Louisiana, just across the Mississippi River.

Natchez Burning is an epic, a saga, but it’s also a thriller. We feel the panic and terror of young Jimmy Revels as he walks into the Double Eagles’ trap in 1968. And the rage and despair of Lincoln Turner, Viola’s son, who doesn’t know the truth of his own origins. We feel Caitlin Masters’ desperate need to tell the story through the newspaper she publishes. Sustaining all of this tension for almost 800 pages is no small feat. It’s a testament to Greg Iles’s power as a storyteller.

Iles doesn’t tie up all the loose ends. Natchez Burning is just the first installment in what promises to be an extraordinary trilogy built upon the premise that, in some pockets of the South, the Civil War hasn’t ended. “Appomattox hadn’t ended anything,” a character thinks early in the story, in a scene set in 1968. “[It] had merely heralded an intermission. ” As William Faulkner said (and this book’s narrator quotes), “The past is never dead. It’s not even past. ” In Natchez Burning, the sins and unpunished crimes of the generations who fought integration and civil rights are visited upon their children and grandchildren, claiming victims almost half a century later.


From the Back Cover:

#1 New York Times bestselling author Greg Iles returns with his most eagerly anticipated novel yet and his first in five years—Natchez Burning—the first installment in an epic trilogy that interweaves crimes, lies, and secrets past and present in a mesmerizing thriller featuring Southern lawyer and former prosecutor Penn Cage.

Growing up in the rural Southern hamlet of Natchez, Mississippi, Penn Cage learned everything he knows about honor and duty from his father, Tom Cage. But now the beloved family doctor and pillar of the community is accused of murdering Violet Turner, the beautiful nurse with whom he worked in the dark days of the early 1960s. A fighter who has always stood for justice, Penn is determined to save his father, even though Tom, stubbornly evoking doctor-patient privilege, refuses to speak up in his own defense.

The quest for answers sends Penn deep into the past—into the heart of a conspiracy of greed and murder involving the Double Eagles, a vicious KKK crew headed by one of the wealthiest and most powerful men in the state. With the aid of a local friend and reporter privy to some of Natchez's oldest and deadliest secrets, Penn follows a bloody trail that stretches back forty years, to one undeniable fact: no one—black or white, young or old, brave or not—is ever truly safe.

With everything on the line, including his own life, Penn must decide how far he will go to protect those he loves . . . and see justice done, once and for all.

Rich in Southern atmosphere and electrifying plot turns, Natchez Burning marks the brilliant return of a genuine American master of suspense. Tense and disturbing, it is the most explosive, exciting, sexy, and ambitious story Greg Iles has written yet.