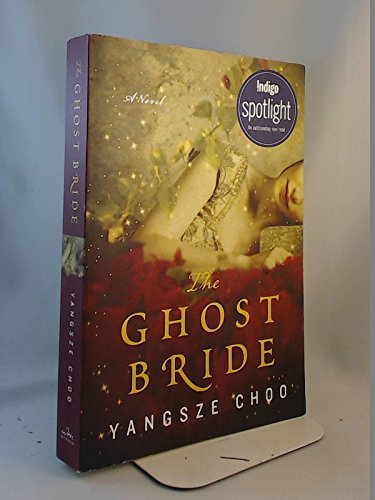 Soon to be a Netflix Manadrin original drama.

By the New York Times bestselling author of THE NIGHT TIGER, a selection of Reese’s Book Club.

Li Lan, the daughter of a respectable Chinese family in colonial Malaysia, hopes for a favorable marriage, but her father has lost his fortune, and she has few suitors. Instead, the wealthy Lim family urges her to become a “ghost bride” for their son, who has recently died under mysterious circumstances. Rarely practiced, a traditional ghost marriage is used to placate a restless spirit. Such a union would guarantee Li Lan a home for the rest of her days, but at what price?

Night after night, Li Lan is drawn into the shadowy parallel world of the Chinese afterlife, where she must uncover the Lim family’s darkest secrets—and the truth about her own family.

Reminiscent of Lisa See’s Peony in Love and Amy Tan’s The Bonesetter’s Daughter, The Ghost Bride is a wondrous coming-of-age story and from a remarkable new voice in fiction.

One evening, my father asked me whether I would like to become a ghost bride. . . .

Though ruled by British overlords, the Chinese of colonial Malaya still cling to ancient customs. And in the sleepy port town of Malacca, ghosts and superstitions abound.

Li Lan, the daughter of a genteel but bankrupt family, has few prospects. But fate intervenes when she receives an unusual proposal from the wealthy and powerful Lim family. They want her to become a ghost bride for the family's only son, who recently died under mysterious circumstances. Rarely practiced, traditional ghost marriages are used to placate restless spirits. Such a union would guarantee Li Lan a home for the rest of her days, but at a terrible price.

After an ominous visit to the opulent Lim mansion, Li Lan finds herself haunted not only by her ghostly would-be suitor, but also by her desire for the Lims' handsome new heir, Tian Bai. Night after night, she is drawn into the shadowy parallel world of the Chinese afterlife, with its ghost cities, paper funeral offerings, vengeful spirits, and monstrous bureaucracy—including the mysterious Er Lang, a charming but unpredictable guardian spirit. Li Lan must uncover the Lim family's darkest secrets—and the truth about her own family—before she is trapped in this ghostly world forever.

Yangsze Choo is a fourth-generation Malaysian of Chinese descent. She lives in California with her husband and their two children, and loves to eat and read (often at the same time).

Book Description Soft cover. Condition: Very Good. 1st Edition. First Indigo Edition, first printing, softcover. 2013, New York. This is a used paperback book in Very Good condition. There is light edge wear and evidence of use. No interior writing or markings. A high quality paperback with excellent paper and French fold covers. A nice reading copy. Please see images of the book you will receive. Notes: Author's first novel is quite unusual. No spoilers here but ghosts are involved. Recommended to readers looking for something different. Collectors will want to track down the uncommon first printing of the hardcover. Seller Inventory # ABE-1596765425561