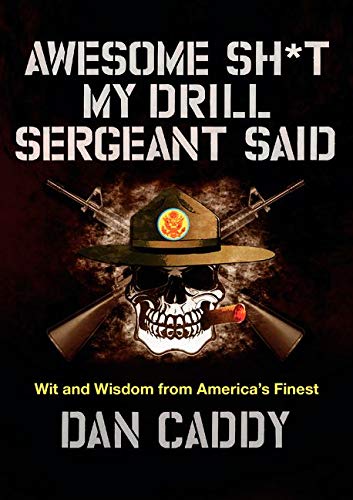 The official tie-in book to the wildly popular Facebook page, featuring brand-new crazy, off-the-wall, outrageously funny, and downright “awesome” pearls of wisdom from real-life drill sergeants and instructors from all branches of the military.

After his deployment in Afghanistan, Dan Caddy began swapping great drill sergeant stories by e-mail with other combat veterans—an exchange with friends that would grow into the dedicated Facebook page, “Awesome Sh*t My Drill Sergeant Said.” But what began as a comedic outlet has evolved into a robust online community and support network that conducts fundraisers for and donates to military charities, has helped veterans struggling with PTSD and other issues, and on numerous occasions, literally saved lives.

For anyone who has suffered a hard-ass manager (in uniform or not), Awesome Sh*t My Drill Sergeant Said will add a much needed dose of humor to the day.

Even if you've never served in the military, you know the drill sergeant. The mere sight of his fatigues and the iconic "Round Brown" campaign hat strikes fear into the bravest of hearts. Drill sergeants inflict pain, demand discipline, and aren't afraid of power, aggression, and using fear as a motivational tool. But unless you've witnessed one firsthand with your face in the mud doing pushups, you might not know one other fact . . . drill sergeants are some of the FUNNIEST people on the planet!

After his deployment in Afghanistan, Dan Caddy began swapping great drill sergeant stories by e-mail and social media with other veterans. Now, in Awesome Sh*t My Drill Sergeant Said, Caddy shares the best-of-the-best quotes, one-liners, stories, and top-ten lists—proving once and for all that drill sergeants are the world's most underrated comedians and philosophers.

If you have ever suffered a hard-ass manager (in uniform or not), these often profane, sometimes profound, yet always entertaining rants from real life soldiers will add a much-needed dose of humor to your day. Now stop laughing and drop and give me fifty.

Dan Caddy is a former marketing professional and veteran of Operation Enduring Freedom. He is the founder of the Awesome Sh*t My Drill Sergeant Said Facebook page. The Facebook page now has more than ten individuals on staff, including many current and former drill sergeants. Dan is the president and founder of Battle in Distress Inc., a nonprofit devoted to helping service members in crisis. He lives in Vermont and continues to serve in the military.