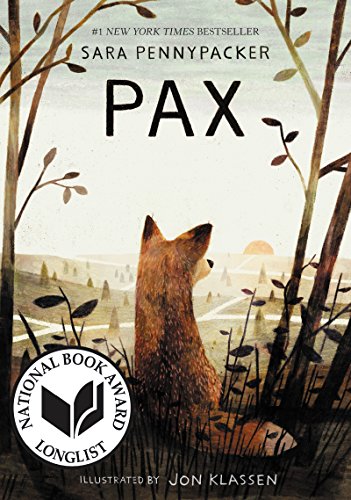 From bestselling and award-winning author Sara Pennypacker comes a beautifully wrought, utterly compelling novel about the powerful relationship between a boy and his fox. Pax is destined to become a classic, beloved for generations to come.

Pax and Peter have been inseparable ever since Peter rescued him as a kit. But one day, the unimaginable happens: Peter's dad enlists in the military and makes him return the fox to the wild.

At his grandfather's house, three hundred miles away from home, Peter knows he isn't where he should be—with Pax. He strikes out on his own despite the encroaching war, spurred by love, loyalty, and grief, to be reunited with his fox.

Meanwhile Pax, steadfastly waiting for his boy, embarks on adventures and discoveries of his own. . . .

Sara Pennypacker is the author of the award-winning, New York Times bestselling Clementine series, the acclaimed novel Summer of the Gypsy Moths, and the picture books Meet the Dullards, Pierre in Love, and Sparrow Girl. She divides her time between Cape Cod, Massachusetts, and Florida. You can visit her online at www.sarapennypacker.com.

Jon Klassen grew up in Niagara Falls, Canada, and now lives in Los Angeles, California. He is the Caldecott Award-winning author and illustrator of I Want My Hat Back and This Is Not My Hat, as well as the illustrator of Sam and Dave Dig a Hole and Extra Yarn by Mac Barnett; The Dark by Lemony Snicket; House Held Up by Trees by Ted Kooser; Cats' Night Out by Caroline Stutson; and the first three books in the Incorrigible Children of Ashton Place series.

Gr 4–7—A viscerally affecting story of war, loss, and the power of friendship. Pennypacker, author of the exuberant "Clementine" series (Disney-Hyperion) and the charmingly morbid Summer of the Gypsy Moths (HarperCollins, 2012), here displays not only her formidable writing skills and a willingness to stretch her storytelling into increasingly complex narrative forms but also her ability to tackle dark and weighty themes with sensitivity and respect for the child reader. Set in an intentionally undefined time and place that could very well be a near-future America, the novel opens with a heartbreaking scene of a tame red fox, Pax, being abandoned at the side of the road by his beloved boy, Peter. Perspectives alternate between the boy and the fox, and readers learn that a terrible war rages in this land. Peter's father is about to leave for the frontlines, and while he's away, Peter must live with his grandfather out in the country—and his father makes it clear that there is no place for Pax in Peter's temporary home. Almost as soon as he arrives at his grandfather's, Peter is overcome with guilt, and he sets off under the cover of darkness to trek the 300 miles back to his home, where he prays he'll find Pax. The loyal fox, meanwhile, must figure out how to survive in the wild—though never losing hope that his boy will return for him. As the protagonists struggle to reunite in a world in the grip of violence and destruction, they each find helpers who assist them on their respective journeys: Peter breaks his foot and is rehabilitated by Vola, a hermit suffering from post-traumatic stress disorder, while Pax is taken in by a leash of foxes who teach him the basics of foraging and hunting. Pennypacker doesn't shy away from some of the more realistic aspects of war, though she keeps most of the violence slightly off-screen: in one scene, the wild foxes define war for the naive Pax as a "human sickness" that causes them to turn on their own kind, akin to rabies; later, as the battle creeps closer, several creatures are maimed and killed by land mines. Black-and-white drawings by Klassen offer a respite for readers, while adding to the haunting atmosphere.With spare, lyrical prose, Pennypacker manages to infuse this tearjerker with a tender hope, showing that peace and love can require just as much sacrifice as war. VERDICT A startling work of fiction that should be read—and discussed—by children and adults alike.—Kiera Parrott, School Library Journal