Items related to The Smear: How Shady Political Operatives and Fake...

Attkisson, Sharyl The Smear: How Shady Political Operatives and Fake News Control What You See, What You Think, and How You Vote

The Smear: How Shady Political Operatives and Fake News Control What You See, What You Think, and How You Vote 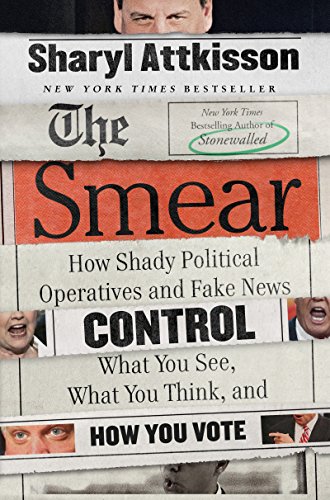 Ever wonder how politics turned into a take-no-prisoners blood sport? The New York Times bestselling author of Stonewalled pulls back the curtain on the shady world of opposition research and reveals the dirty tricks those in power use to influence your opinions.

Behind most major political stories in the modern era, there is an agenda; an effort by opposition researchers, spin doctors, and outside interests to destroy an idea or a person. The tactic they use is the Smear. Every day, Americans are influenced by the Smear without knowing it. Paid forces cleverly shape virtually every image you cross. Maybe you read that Donald Trump is a racist misogynist, or saw someone on the news mocking the Bernie Sanders campaign. The trick of the Smear is that it is often based on some shred of truth, but these media-driven "hit pieces" are designed to obscure the truth. Success hinges on the Smear artist’s ability to remain invisible; to make it seem as if their work is neither calculated nor scripted. It must appear to be precisely what it is not.

Veteran journalist Sharyl Attkisson has witnessed this practice firsthand. After years of being pitched hit jobs and puff pieces, she’s an expert at detecting Smear campaigns. Now, the hard-hitting investigative reporter shares her inside knowledge, revealing how the Smear takes shape and who its perpetrators are—including Clinton confidant Sidney Blumenthal and, most influential of all, "right-wing assassin turned left-wing assassin" (National Review) political operative David Brock and his Media Matters for America empire.

Attkisson exposes the diabolical tactics of Smear artists, and their outrageous access to the biggest names in political media—operatives who are corrupting the political process, and discouraging widespread citizen involvement in our democracy.

Don’t believe everything you read.

Behind most major political stories there is an agenda: To destroy an idea or the people advancing it. Maybe you watched someone on the news report that Donald Trump is a racist misogynist, read that Hillary Clinton used a body double, or heard that Bernie Sanders cheated in the primary. Regardless of accuracy, the themes get repeated until they become accepted by many as the truth. It’s called “the smear.” Sophisticated operatives work behind the scenes to establish narratives, manipulate journalists, and shape the images you see every day. Nothing is by accident.

Now hard-hitting investigative journalist Sharyl Attkisson, the New York Times bestselling author of Stonewalled, takes you behind the scenes of the modern smear machine, exploring how operatives from corporations and both sides of the political aisle have manipulated a complicit mainstream media to make disinformation, rumor, and dirty tricks defining traits of our democracy. Pulling back the curtain on the shady world of opposition research, she reveals how those in power create well-funded, organized attack campaigns to take down their enemies and influence your opinions, offering a detailed examination of the think tanks, super PACs, LLCs, and nonprofits that have become the hidden backers of some of the biggest smears in American politics.

And she doesn’t just tell stories—she names names, sharing her deeply researched account of how smears take shape and who their perpetrators are—from Clinton confidant Sidney Blumenthal to liberal political operative David Brock, who, along with his expansive Media Matters for America empire, has been rewriting the rules of the smear game for decades while raking in millions of dollars in generous compensation. In addition, Attkisson reveals outrageous transactional journalism and exposes scandalous emails behind the smear industrial complex, showing how Campaign 2016 became the exclamation point on the thirty-year evolution of the smear machine. Dissecting the most divisive, partisan election in American history, she explores how both sides used every smear tactic as a political weapon, culminating in Donald Trump’s hard-fought victory, even as his detractors have continued their smears against him into the Oval Office.

What emerges is a timely assault on the mainstream media’s willingness to sacrifice ethics for clicks, and the cynical politicians and high-paid consultants who exploit this reality. A critical discussion for this perilous moment, The Smear is a disturbing look at how the black market serving professional propagandists really works.

Sharyl Attkisson has been a working journalist for more than thirty years and is host of Sinclair's Sunday morning TV program "Full Measure with Sharyl Attkisson." She has covered controversies under the administrations of Bill Clinton, George W. Bush, and Barack Obama, emerging with a reputation, as the Washington Post recently put it, as a “persistent voice of news-media skepticism about the government’s story.” She is the recipient of five Emmy Awards and an Edward R. Murrow Award for investigative reporting. She has worked at CBS News, PBS, and CNN and is a fourth degree blackbelt in TaeKwonDo.

1. The Smear: How Shady Political Operatives and Fake News Control What You See, What You Think, and How You Vote

2. The Smear: How Shady Political Operatives and Fake News Control What You See, What You Think, and How You Vote

3. The Smear: How Shady Political Operatives and Fake News Control What You See, What You Think, and How You Vote

4. THE SMEAR: HOW SHADY POLITICAL O

5. The Smear: How Shady Political Operatives and Fake News Control What You See, What You Think, and How You Vote

Book Description Harper, 2017. Hardcover. Condition: New. We offer fast reliable shipping on all orders. All are brand new and have a 100% money back guarantee. Seller Inventory # ABE-1498566976600

6. THE SMEAR: HOW SHADY POLITICAL O

7. The Smear: How Shady Political Operatives and Fake News Control What You See, What You Think, and How You Vote