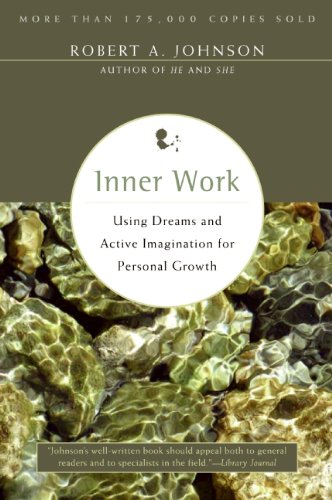 A noted author and Jungian analyst teaches how to use dreams and inner exercises to achieve personal wholeness and a more satisfying life.

Robert A. Johnson, a noted lecturer and Jungian analyst, is also the author of He, She, We, Inner Work, Ecstasy, Transformation, and Owning Your Own Shadow.

Alternative Realities: The World of Dreaming, the Realm of Imagination

Our verbal patterns betray many of our automatic assumptions: If one discusses a dream with a friend, the friend is likely to ask something like, "Did that detail really happen, or only in the dream?" The implication is that what happens in a dream is not .'real." In fact, it would be more accurate to ask, "Did it happen in dream reality, or in physical reality? In the world of dreaming, or in the ordinary world?"

Both are genuine worlds, both are realities that truly exist. But the world of dreaming, if we only realized it, has more practical and concrete effect on our lives than outer events do. For it is in the world of dreaming that the unconscious is working out its powerful dynamics. It is there that the great forces do battle or combine to produce the attitudes, ideals, beliefs, and compulsions that motivate most of our behavior.

Once we become sensitive to dreams, we discover that every dynamic in a dream is manifesting itself in some way in our practical lives-in our actions, relationships, decisions, automatic routines, urges, and feelings. We believe ourselves to be in conscious control of these elements of life. But this belief is the great illusion of ego-control. These aspects of our lives are actually determined from a far deeper place. It is in the world of dreaming that their root sources are revealed in a form that we can see and understand.

The unconscious has a particular capacity to create images and to use those images as symbols. It is these symbols that form our dreams, creating a language by which the unconscious communicates its contents to the conscious mind.

The symbolic imagery of the unconscious is the creative source of the human spirit in all its realizations. Not only have consciousness and the concepts of its philosophical understanding of the world arisen from the symbol but also religion, rite and cult, art and customs. And because the symbol-forming process of the unconscious is the source of the human spirit, language, whose history is almost identical with the genesis and development of human consciousness, always starts out as a symbolic language. Thus Jung writes: "An archetypal content expresses itself, first and foremost, in metaphors." (Neumann, Great Mother, p. 17)

The image-symbols of the unconscious find their way to the level of consciousness mainly by two routes: dreams and imagination. It is easier to grasp the symbolic quality with dreams, for dreams often present mythical creatures and unearthly situations that would be impossible in everyday physical life. People are usually confused by the dream images until they learn that the images are symbolic and are not to be taken literally.

Since dream images make no sense in ordinary terms, people dismiss them as "weird" or meaningless, but actually, dreams are completely coherent. If we take the time to learn their language, we discover that every dream is a masterpiece of symbolic communication. The unconscious speaks in symbols, not to confuse us, but simply because that is its native idiom.

I was never able to agree ... that the dream is a "facade" behind which its meaning lies hidden -- a meaning already known but maliciously, so to speak, withheld from consciousness. To me, dreams are a part of nature, which harbors no intention to deceive, but expresses something as best it can, just as a plant grows or an animal seeks its food as best it can. These forms of life, too, have no wish to deceive our eyes, but we may deceive ourselves because our eyes are shortsighted. Long before I met Freud I regarded the Unconscious, and dreams, which are its direct exponents, as natural processes to which no arbitrariness can be attributed, and above all, no legerdemain. (lung, MDR, p. 161)

We may compare a dream to a screen on which the unconscious projects its inner drama. We see there the various inner personalities that make up much of our total character, the dynamics among the forces that make up the unconscious. These invisible forces and their activities set off charges, so to speak, that are transmitted onto the screen. They take the form of images, and the interplay of the dream images gives us an exact representation of those inner dynamics that go on inside us.

In learning how to understand these images, our conceptual starting point is our realization that they are not to be taken liter-, ally: We learn to look for an attitude, an inner personality, an inner development or conflict that clothes itself in the form and color of this image so that it may be visible to us in the Land of Dreaming.