Items related to The Lost Art of War

The Lost Art of War 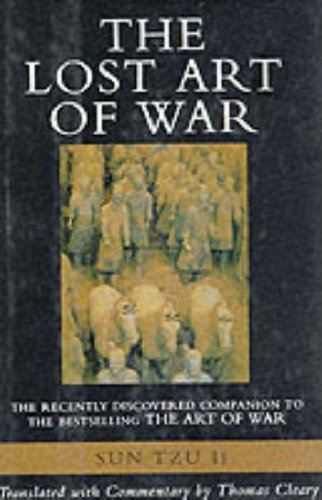 In 1972, The Lost Art of War was discovered in an ancient Chinese tomb. The first complete manuscript ever found from the legendary military strategist Sun Tzu II (commonly known as Sun Bin, a lineal descendent of the great Sun Tzu), this sophisticated manual delves even deeper than The Art of War into the complex principles and practices of organizations, tactical formation, strategic maneuvering, and adaptation. Like those of his distinguished ancestor, Sun Tzu II's insights and strategies can be applied to life situations far beyond warfare - including government, diplomacy, business, relationship, and social action.
Renowned scholar Thomas Cleary, universally praised for his ability to capture the often cryptic meanings of Chinese texts, has masterfully translated the subtle and challenging original text of The Lost Art of War and has contemporized Sun Tzu II's strategic insights with his own illuminating and accessible commentary.
An ancient version of Sun Tzu's The Art of War was also found in the tomb, which differs significantly from previously known editions. Thus, Cleary additionally offers a fascinating analysis comparing the teachings of The Lost Art of War to those of the classic The Art of War as it is presented in this newly discovered version. Sun Tzu II draws on other traditions of strategic thinking while extending the teachings of his ancestor.