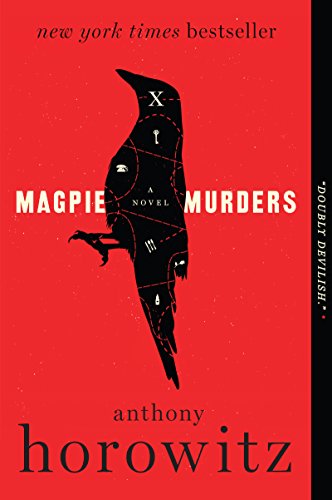 "Magpie Murders is a double puzzle for puzzle fans, who don’t often get the classicism they want from contemporary thrillers." --Janet Maslin, The New York Times

When editor Susan Ryeland is given the manuscript of Alan Conway’s latest novel, she has no reason to think it will be much different from any of his others. After working with the bestselling crime writer for years, she’s intimately familiar with his detective, Atticus Pünd, who solves mysteries disturbing sleepy English villages. An homage to queens of classic British crime such as Agatha Christie and Dorothy Sayers, Alan’s traditional formula has proved hugely successful. So successful that Susan must continue to put up with his troubling behavior if she wants to keep her job.

Conway’s latest tale has Atticus Pünd investigating a murder at Pye Hall, a local manor house. Yes, there are dead bodies and a host of intriguing suspects, but the more Susan reads, the more she’s convinced that there is another story hidden in the pages of the manuscript: one of real-life jealousy, greed, ruthless ambition, and murder.

Masterful, clever, and relentlessly suspenseful, Magpie Murders is a deviously dark take on vintage English crime fiction in which the reader becomes the detective.

An Amazon Best Book of June 2017: When editor Susan Ryeland begins to read the latest manuscript by curmudgeonly, bestselling author Alan Conway, she has no idea that by the time she gets to the end, the author will be dead from a mysterious fall, and that the last chapter of his last novel will be MIA. Sounds simple enough, but Horowitz uses this set-up to construct a clever novel-within-a-novel framework. One novel is set in 1950s Saxby-on-Avon, the English village where Conway’s Poirot-like fictional detective Atticus Pund arrives to investigate a murder, the other in modern-day London where Susan’s reading of the manuscript leads her to suspect that Conway’s death may not have been accidental. Two novels for the price of one means double the fun for readers: two mysteries, two detectives, and possibly two murderers. Paying homage to the vintage British manor house mysteries, Magpie Murders is a masterfully dark, twisty thriller with only one down side: reading it will make you wish there really was a series of Atticus Pund thrillers. --Vannessa Cronin, The Amazon Book Review

From the Globe and Mail–bestselling author of Moriarty, this “spectacularly impressive” (Washington Post) and riveting thriller weaves a classic whodunit worthy of Agatha Christie into a chilling, ingeniously original modern-day mystery.

Editor Susan Ryeland has worked with bestselling crime writer Alan Conway for years, so she has no reason to think his latest novel will be much different from his others. Readers love his detective, Atticus Pünd, a celebrated solver of crimes in the sleepy English villages of the 1950s.

But Conway’s latest tale of murder at Pye Hall is not quite what it seems. Yes, there are dead bodies and a host of intriguing suspects, but hidden in the pages of the manuscript lies another story: a tale written between the very words on the page, telling of real-life jealousy, greed, ruthless ambition and murder.

Masterful, clever and relentlessly suspenseful, Magpie Murders is a “doubly devilish” (People) take on vintage English crime fiction, in which the reader becomes the detective.