Items related to The Huntress: A Novel

Quinn, Kate The Huntress: A Novel

The Huntress: A Novel 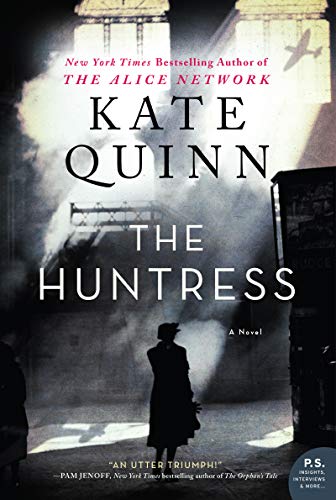 One of BookBub's Biggest Books of the Year

“If you enjoyed “The Tattooist of Auschwitz,” read “The Huntress,” by Kate Quinn." The Washington Post

From the author of the New York Times and USA Today bestselling novel, THE ALICE NETWORK, comes another fascinating historical novel about a battle-haunted English journalist and a Russian female bomber pilot who join forces to track the Huntress, a Nazi war criminal gone to ground in America.

In the aftermath of war, the hunter becomes the hunted...

Bold and fearless, Nina Markova always dreamed of flying. When the Nazis attack the Soviet Union, she risks everything to join the legendary Night Witches, an all-female night bomber regiment wreaking havoc on the invading Germans. When she is stranded behind enemy lines, Nina becomes the prey of a lethal Nazi murderess known as the Huntress, and only Nina’s bravery and cunning will keep her alive.

Transformed by the horrors he witnessed from Omaha Beach to the Nuremberg Trials, British war correspondent Ian Graham has become a Nazi hunter. Yet one target eludes him: a vicious predator known as the Huntress. To find her, the fierce, disciplined investigator joins forces with the only witness to escape the Huntress alive: the brazen, cocksure Nina. But a shared secret could derail their mission unless Ian and Nina force themselves to confront it.

Growing up in post-war Boston, seventeen-year-old Jordan McBride is determined to become a photographer. When her long-widowed father unexpectedly comes homes with a new fiancée, Jordan is thrilled. But there is something disconcerting about the soft-spoken German widow. Certain that danger is lurking, Jordan begins to delve into her new stepmother’s past—only to discover that there are mysteries buried deep in her family . . . secrets that may threaten all Jordan holds dear.

In this immersive, heart-wrenching story, Kate Quinn illuminates the consequences of war on individual lives, and the price we pay to seek justice and truth.

In the aftermath of war, the hunter becomes the hunted . . .

Bold, reckless Nina Markova grows up on the icy edge of Soviet Russia, dreaming of flight and fearing nothing. When the tide of war sweeps over her homeland, she gambles everything to join the infamous Night Witches, an all-female night bomber regiment wreaking havoc on Hitler’s eastern front. But when she is downed behind enemy lines and thrown across the path of a lethal Nazi murderess known as the Huntress, Nina must use all her wits to survive.

British war correspondent Ian Graham has witnessed the horrors of war from Omaha Beach to the Nuremberg Trials. He abandons journalism after the war to become a Nazi hunter, yet one target eludes him: the Huntress. Fierce, disciplined Ian must join forces with brazen, cocksure Nina, the only witness to escape the Huntress alive. But a shared secret could derail their mission, unless Ian and Nina force themselves to confront it.

Seventeen-year-old Jordan McBride grows up in post–World War II Boston, determined despite family opposition to become a photographer. At first delighted when her long-widowed father brings home a fiancée, Jordan grows increasingly disquieted by the soft-spoken German widow who seems to be hiding something. Armed only with her camera and her wits, Jordan delves into her new stepmother’s past and slowly realizes there are mysteries buried deep in her family. But Jordan’s search for the truth may threaten all she holds dear.

Kate Quinn is a native of Southern California. She attended Boston University, where she earned bachelor’s and master’s degrees in classical voice. A lifelong history buff, she has written four novels in the Empress of Rome Saga and two books set in the Italian Renaissance detailing the early years of the infamous Borgia clan. All have been translated into multiple languages. She and her husband now live in San Diego with two black dogs named Caesar and Calpurnia.

1. The Huntress: A Novel

2. The Huntress: A Novel

3. The Huntress: A Novel

4. The Huntress: A Novel

5. The Huntress: A Novel

6. The Huntress: A Novel

7. The Huntress: A Novel

8. The Huntress (Paperback or Softback)

9. THE HUNTRESS: A Novel