Items related to Shaken: Drinking with James Bond and Ian Fleming, the... 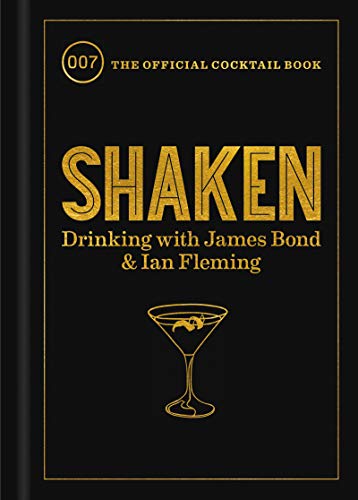 Readers can explore James Bond creator Ian Fleming’s writing on the pleasures of drinking and mix themselves fifty delicious cocktails from recipes inspired by his books and developed by award-winning London bar, Swift.

Both Bond and Fleming were partial to a stiff drink. In both fiction and real life, cocktails were an important and well-chosen accompaniment to adventure and daring and often relaxing. Fleming made the Martini famous with Bond’s ritual of always ordering it “shaken, not stirred”. But in every James Bond book a wide selection of strong, sophisticated and carefully crafted drinks are essential details to the story.

The recipes in Shaken are divided into five categories: Straight Up; On the Rocks; Tall; Fizzy; and Exotic. Sip on inventions such as Smersh, Moneypenny, That Old Devil M and Diamonds Are Forever, as well as classic Bond cocktails such as the Vesper—and, of course, the Dry Martini. Each recipe is illustrated by a stunning full-color photo of the drink and wonderful extracts from Fleming’s writing—taken from the passage where the drink was featured or a place, character, or plot that inspired it.

Shaken features a foreword written by the novelist’s nephew, Fergus Fleming, as well as plenty of his writing on whisky, gin, rum, and other spirits.

From the first James Bond novel, Casino Royale, in which Bond christens The Vesper martini to the immortal line, “shaken and not stirred,” which first appeared in print in Diamonds Are Forever, strong, carefully crafted cocktails are at the glamorous heart of every Bond story.

In this authorized cocktail book, discover extracts from Ian Fleming’s writing, the stories behind the James Bond phenomenon, and drinks inspired by 007 and his creator. There are ten classic cocktails from the pages of the Bond novels, including the favored martini, plus forty brand-new drinks paying tribute to the people, places, and plots of the 007 series, created by mixologists at the award-winning bar Swift.

Ian Lancaster Fleming was born in London in 1908. His first job was at Reuters news agency, after which he worked briefly as a stockbroker before working in Naval Intelligence during World War Two. His first novel, Casino Royale, was published in 1953 and was an instant success. Fleming went on to write thirteen other Bond books as well as two works of non-fiction and the children's classic Chitty Chitty Bang Bang. The Bond books have earned praise from figures such as Raymond Chandler, who called Fleming 'the most forceful and driving writer of thrillers in England' and President Kennedy, who named From Russia with Love as one of his favorite books. The books inspired a hugely successful series of film adaptations which began in 1961 with the release of Dr No.He was married to Ann O'Neill with whom he had a son, Caspar. He died in 1964.

Fergus Fleming is Ian Fleming's nephew. He is the author of several non-fiction books including Barrow's Boys, Killing Dragons and Ninety Degrees North. Recently he edited The Man with the Golden Typewriter: Ian Fleming's James Bond Letters. He lives in Gloucestershire in the UK.