Items related to The House of Sixty Fathers 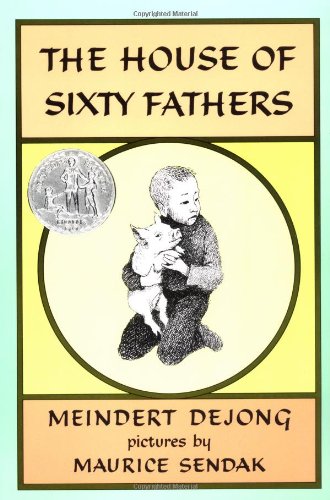 THE HOUSE OF SIXTY FATHERS

Tien Pao is all alone in enemy territoy. Only a few days before, his family had escaped from the Japanese army, fleeing downriver by boat. Then came the terrible rainstorm. Tien Pao was fast asleep in the little sampan when the boat broke loose from its moorings and drifted right back to the Japanese soldiers. With only his lucky pig for company, Tien Pao must begin a long and dangerous journey in search of his home and family.

‘A vividly realistic story of China during the early days of the Japanese invasion [which tells of young Tien Pao’s journey to find his family].’ —C.‘Valuable as enrichment literature for elementary students involved in Chinese studies.’ —Scholastic Teacher.

Meindert DeJong is the award-winning author of many classic books for children, including the Newbery Medal-winning The Wheel On The Schooland the Newbery Honor-winning Along Came A Dog, Shadrach,and The House Of Sixty Fathers, all available in Harper Trophy editions and illustrated by Maurice Sendak. Among Mr. Sendak's other popular books is his Caldecott Medal-winning Where The Wild Things Are.

Maurice Sendak’s children’s books have sold over 30 million copies and have been translated into more than 40 languages. He received the 1964 Caldecott Medal for Where the Wild Things Are and is the creator of such classics as In the Night Kitchen, Outside Over There, Higglety Pigglety Pop!, and Nutshell Library. In 1970 he received the international Hans Christian Andersen Medal for Illustration, in 1983 he received the Laura Ingalls Wilder Award from the American Library Association, and in 1996 he received a National Medal of Arts in recognition of his contribution to the arts in America. In 2003, Sendak received the first Astrid Lindgren Memorial Award, an annual international prize for children’s literature established by the Swedish government.

"Not only a tense adventure story but also a moving picture of one samll boy's tenacious courage."--"The New York Times"