Items related to Girl Reporter Gets the Skinny (Get Real, No. 7)

Ellerbee, Linda Girl Reporter Gets the Skinny (Get Real, No. 7)

Girl Reporter Gets the Skinny (Get Real, No. 7) 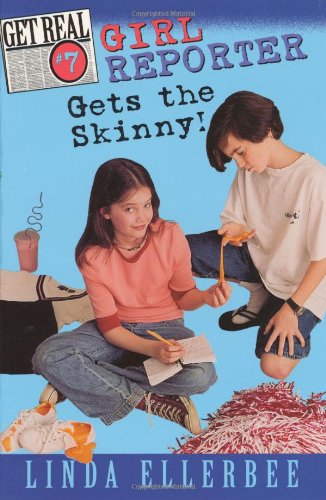 Casey Smith is tumbling—actually, stumbling—into another story. Her best pal, Ringo, is about to make his competition debut with Trumbull's cheerleading squad, but someone's trying to sabotage one of the cheerleaders! Could the saboteur be from a rival team? Or is this a case of jealousy from within Trumbull's ranks?

Casey vows to expose the truth. But can she get her story without the squad's pep-rallying perkiness rubbing off on her? Get real!

Casey Smith, girl reporter extraordinaire, should be a poster child for healthy attitudes in a sea of preteen self-esteem deflation. "My philosophy is: You are who you are. What you look like is just the package you come in... Hey--would a chocolate bar be any less chocolate-y if it came in ugly paper?" Unfortunately, not everyone at Trumbull Middle School is as refreshingly realistic. In fact, there seems to be a rash of fad diets, concern about height and weight, and overall dissatisfaction with looks. Disgusted yet worried by the bewildering behavior of her friends and classmates--at a slumber party several girls even suggest vomiting after dinner as an activity--Casey's nose for news starts tingling. And with a cheerleader competition coming up, one especially cute, slim member of the Frosted Cheerios, as Casey calls the pep squad, seems to be the target of jealous sabotage. This hard-bitten journalist for the school's Real News, is on the case.

Every bit as entertaining and on-the-mark as her earlier Get Real! titles, (Girl Reporter Rocks Polls!, Girl Reporter Blows Lid Off Town!, and others), Linda Ellerbee's Girl Reporter Gets the Skinny! tackles a very serious subject with grace and levelheadedness. Ellerbee has obviously done her research, as reflected in Casey's own investigation and in her discussions with her one-of-a-kind grandmother. The book sports a brilliantly real cast of characters with all the foibles, insecurities, and charm of middle school age kids the world over. (Ages 8 to 12) --Emilie Coulter

Linda Ellerbee is herself a girl reporter extraordinaire. She is the producer and host of Nick News, the Emmy Award-winning children's TV series on Nickelodeon. About Casey, Linda says, "Casey has a nose for news. She also has eyes, fingers, and a big mouth. Guess which one gets her in the most trouble?"

1. Girl Reporter Gets the Skinny (Get Real, No. 7) Ellerbee, Linda

2. Girl Reporter Gets the Skinny (Get Real, No. 7) Ellerbee, Linda