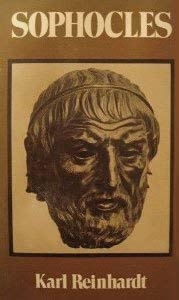 From the book jacket: "This book is not intended," the author writes, "as yet another competitor for a place among all the latest accounts of the three ancient tragic poets. Nor is it intended as an act of homage to Sophocles on the part of a populariazer of the humanities. It is an attempt to examine his work by means of comparison in order to rescue it from certain prevalent methods of interpretatiohn which succed only in obscuring it." Reinhardt's work on Sophocles, first published in 1933, has long been recognized as fundamental. After a brief introduction, a chapter is devoted to each of the surviving plays, the action and significance of which are discussed scene by scene. From this analysis emerges a magisterial account of the development of Sophocles' dramatic technique, as shown both in the structure of individual scenes and of the play as a whole. The development of his treatment of character from the earlier 'enclosed" type to the freely interacting and interrelating figures of the late plays is also brought out. Reinhardt discusses the relation of the inner world of Sophocles' heroes, to the world in which they live and to the "daimonic" world of the gods, and the way in which Sophocles' language and style evolve in response to all these developments. The fragments are considered briefly in the final chapter. The translation has been made from the third edition of 1947. Professor Hugh Lloyd-Jones has written a new Introduction, and has also provided additional notes which take account of more recent scholarship.