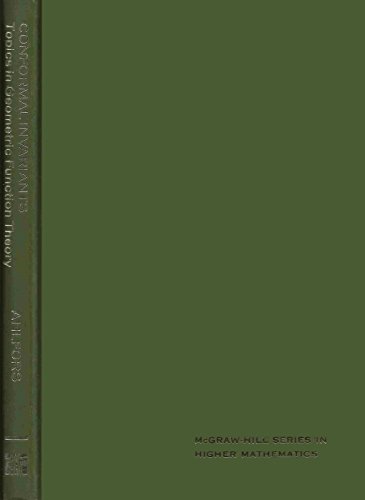 Most conformal invariants can be described in terms of extremal properties. Conformal invariants and extremal problems are therefore intimately linked and form together the central theme of this classic book which is primarily intended for students with approximately a year's background in complex variable theory. The book emphasizes the geometric approach as well as classical and semi-classical results which Lars Ahlfors felt every student of complex analysis should know before embarking on independent research. At the time of the book's original appearance, much of this material had never appeared in book form, particularly the discussion of the theory of extremal length. Schiffer's variational method also receives special attention, and a proof of $\vert a_4\vert \leq 4$ is included which was new at the time of publication. The last two chapters give an introduction to Riemann surfaces, with topological and analytical background supplied to support a proof of the uniformization theorem. Included in this new reprint is a Foreword by Peter Duren, F. W. Gehring, and Brad Osgood, as well as an extensive errata.

... encompasses a wealth of material in a mere one hundred and fifty-one pages. Its purpose is to present an exposition of selected topics in the geometric theory of functions of one complex variable, which in the author's opinion should be known by all prospective workers in complex analysis. From a methodological point of view the approach of the book is dominated by the notion of conformal invariant and concomitantly by extremal considerations. ... It is a splendid offering. ----Reviewed for Math Reviews by M. H. Heins in 1975

Book Description McGraw-Hill, 1973. Condition: Good. A+ Customer service! Satisfaction Guaranteed! Book is in Used-Good condition. Pages and cover are clean and intact. Used items may not include supplementary materials such as CDs or access codes. May show signs of minor shelf wear and contain limited notes and highlighting. Seller Inventory # 0070006598-2-4

Book Description McGraw-Hill Inc.,US 1973-12-01, 1973. Hardcover. Condition: Very Good. Item is in very good condition. If supplemental codes/CDs for textbooks are required please contact us prior to purchasing as they may be missing. Seller Inventory # DS-0070006598-2

Shipping: US$ 26.73
From United Kingdom to U.S.A.
Destination, rates & speeds