Items related to Positioning: The Battle for Your Mind (1st Edition...

Positioning: The Battle for Your Mind (1st Edition Revised) 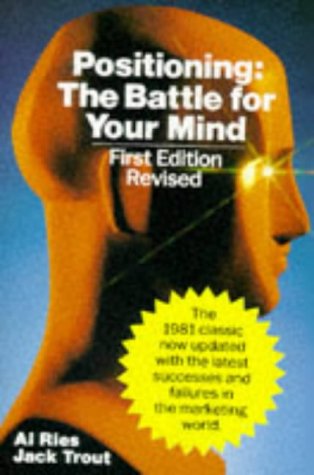 Discusses the new, key advertising concept of positioning, explaining ways companies can create a "position" in the client's mind when launching ad campaigns, with many fascinating case histories and helpful pointers

"...Ries and Trout taught me everything I know about branding, marketing, and product management. When I had the idea of creating a very large thematic community on the Web, I first thought of Positioning...."
­­David Bohnett, Chairman and Founder of GeoCities

"One of the most important communication books I've ever read. I recommend it highly!"
­­Spencer Johnson, MD, co-author of The One Minute Manager

It shook up the world of marketing with all the force of a 20-megaton bomb, and now, two decades later, Positioning is still as fresh and, perhaps, even more relevant, for advertisers in the New Economy. To commemorate the 20th anniversary of the classic book that changed an industry, McGraw-Hill has reunited mavens of marketing Al Ries and Jack Trout to make available to another generation of advertisers the book that forever changed the way advertising is done.

The 20th Anniversary Edition features commentary from the authors that offers fresh insight into why "positioning" a product in a prospective customer's mind is still the most important strategy in business. Ries and Trout look back over two decades of campaigns, offering penetrating analyses of some of the most phenomenal successes and unbelievable failures in advertising history.

The first book to deal with the problems of communicating to a skeptical, over-communicated public, Positioning describes a revolutionary approach to creating a "position" in a prospective customer's mind that reflects a company's own strengths and weaknesses as well as those of its competitors. Writing in their trademark witty, fast-paced style, Ries and Trout explain how to position an industry leader so that it gets into people's minds and stays there, how to position a follower so that it can occupy a space not claimed by the leader, and how to avoid letting a second product ride on the coattails of an established one.