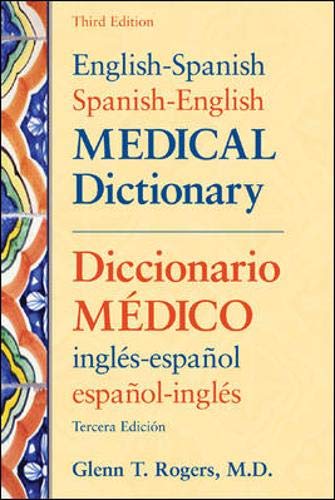 Break the language barrier between healthcare professionals and Spanish-speaking patients

This pocket-sized book contains virtually all health-related terms likely to occur in a conversation between a health worker and a Spanish-speaking patient, including common colloquialisms and slang terms not found in similar dictionaries. The Third Edition contains over 20,000 entries and 5,000 new terms have been added.

Glenn T. Rogers, MD, currently is a staff physician at the Baechtel Creek Medical Center in rural northern California. He attended UC Berkeley, majored in mathematics. He was accepted to the PhD program there, but decided to start a business importing embroidered clothes from Mexico. He perfected his Spanish by spending 3-4 months of the year in Mexico, tending to his import business. After doing some soul searching he decided he wanted to something more important, and applied to medical school. Dr. Rogers was accepted and attended the University of Cincinnati, and did a residency in Internal Medicine at L.A. County+USC. Many of the many patients were Spanish-speaking only, and again he was able to work on his medical Spanish. The first edition of his best selling dictionary was authored and published during his residency. DR. Rogers later worked in the ER for 3 years at LAC+USC, then private practice in Bakersfield for 2 years.