Items related to We The People

Patterson, Thomas We The People 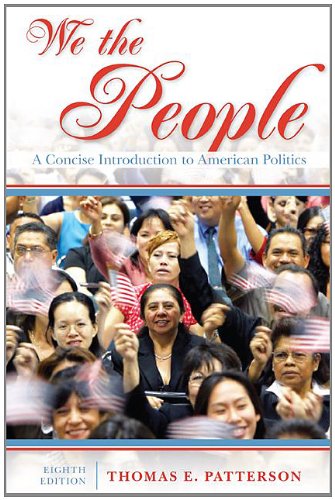 We The People is a concise yet comprehensive book provides a positive, lively, future-oriented narrative introduction to American government and politics. We the People presents material with a currency and relevancy that captures the vivid world of real-life politics. In addition, the text challenges readers to think critically; by giving contextual understanding of major concepts and issues, it encourages them to think about the implications for society and themselves. We the People delves deeper into the basics than most brief books, and each of the 17 chapters (including 3 policy chapters) concludes with a brief reading selection, making the book serve as text and reader in one concise format.

Thomas E. Patterson is Bradlee Professor of Government and the Press in the John F. Kennedy School of Government at Harvard University. He was previously distinguished professor of political science in the Maxwell School of Citizenship at Syracuse University. Raised in a small Minnesota town near the Iowa and South Dakota borders, he was educated at South Dakota State University and the University of Minnesota, where he received his Ph.D. in 1971. Currently running the "Vanishing Voter" study at the Kennedy School of Government, which has been widely used in the media and on college campuses, Tom is also the author of six books and dozens of articles, which focus primarily on the media and elections. His book, 'Out of Order'(1994), received national attention when President Clinton said every politician and journalist should be required to read it. An earlier book, 'The Mass Media Election'(1980), received a 'Choice' award as Outstanding Academic Book, 1980-81. Another of Patterson's books, 'The Unseeing Eye'(1976), was recently selected by the American Association for Public Opinion Research as one of the fifty most influential books of the past half century in the field of public opinion. His current research includes a study of White House communication and a study of the news media's role in Western democracies. His work has been funded by major grants from the National Science Foundation, the Markle Foundation, the Smith-Richardson Foundation, the Ford Foundation and the Pew Charitable Trusts.

1. We the People- A Concise Introduction to American Politics 8th Edition

3. We the People- A Concise Introduction to American Politics 8th Edition

6. We The People Patterson, Thomas