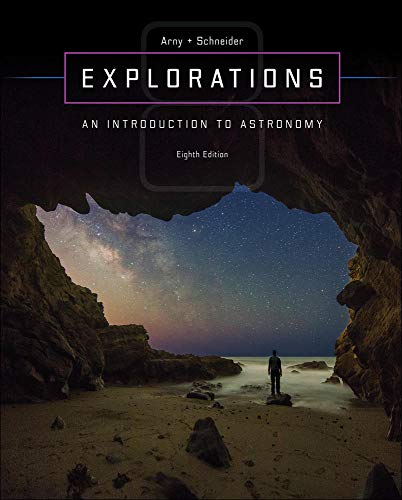 The eighth edition of Explorations: An Introduction to Astronomy strives to share with students a sense of wonder about the universe and the dynamic, ever-changing science of astronomy. Written for students of various educational backgrounds, Explorations emphasizes current information, a visually exciting art package, accessible writing, and accuracy. The new edition also features the most complete technology support package offered with any astronomy text.

Tom Arny is an Emeritus professor in the Astronomy Department at the University of Massachusetts at Amherst. He was associated there with the Five College Astronomy Program(comprising faculty from U-Mass, Amhurst, Hampshire, Mt. Holyoke, and Smith Colleges). Dr. Arny received his undergraduate degree from Haverford College and his Ph.D. in astronomy from the University of Arizona. In addition to his interest in astronomy, he has a long-standing fascination with the natural world: weather (especially atmospheric optics such as rainbows), birds, wildflowers, and butterflies. Visit Dr. Arny's website at: http://www.astro.umass.edu/~arny/astro100.html

Steve Schneider became interested in astronomy at the amateur level when he was a child. He studied astronomy as an undergraduate at Harvard and obtained his Ph.D. from Cornell. His dissertation work received the Trumpler Award of the Astronomical Society of the Pacific, and he was named a Presidential Young Investigator. In addition to teaching introductory astronomy, he works closely with science teachers, presenting workshops and special courses. He also loves to draw and paint.