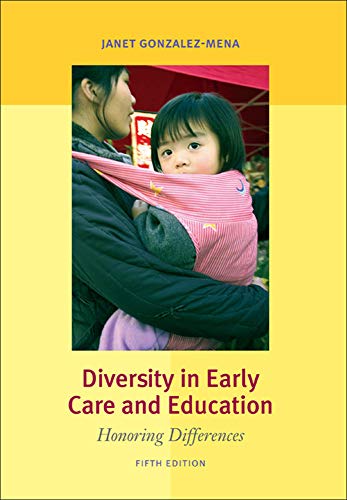 Diversity in Early Care and Education (formerly Multicultural Issues In Child Care) explores the rich diversity encountered in programs and environments for children ages birth to 8, including those serving children with special needs. The emphasis is on the practical and immediate concerns of the early childhood professional and family service worker, though all information has strong theoretical support.

Janet Gonzalez-Mena started her early childhood career in a cooperative preschool as a parent volunteer back in 1966. She then became a Head Start volunteer and ended up as a teacher in a preschool for Spanish-speaking children and their families in 1970’s. She has also helped open several pilot programs including a therapeutic child care program and a home-based bilingual preschool program. When Magda Gerber came into her life in the mid-1970’s, Janet signed up for an internship with her at the Children’s Health Council in Menlo Park, California. As a result of that experience, later, when she became a child care director, she was able to incorporate much of what she learned into her work and was influential in expanding that program to include an infant center. Training and teaching adults has always been sideline, even when she was working with children and families. She worked as a Head Start trainer and as adjunct faculty in 4 community colleges plus the University of California Santa Cruz credential extension program. She taught for 15 years as full time faculty at Napa Valley College in the Child and Family Studies Program. Since 1991, she has been part of the faculty for WestEd’s Program for Infant-Toddler Caregivers (PITC) Training of Trainer Institutes. Janet has been writing along with teaching for all these years and is author of numerous articles and 13 books related to early childhood, including Foundations of Early Childhood Education; Infants, Toddlers, and Caregivers (with co-author Dianne Eyer); and Diversity in Early Care and Education: Honoring Differences (Formerly Multicultural Issues in Child Care). She wrote Dragon Mom about herself as parent to help early childhood professionals alleviate guilt when their parenting doesn't live up to their high standards. Her latest passion is understanding more about the Pikler Institute in Budapest, Hungary, where Magda Gerber came from. It took her 30 years to get there after she first heard of it, but her first trip to it in November of 2003 merely whetted her appetite. She has made two more since and is planning for another one. She is fascinated by the approach and is convinced that this residential nursery is a model for the world. She is continuing to learn more about how this approach can be used to improve infant-toddler care and education programs in the United States. She is also working with a group in Mexico to explore how the approach might fit into their models of residential care for infants and toddlers. Janet has a Master of Arts Degree in Human Development from Pacific Oaks in Pasadena, California.