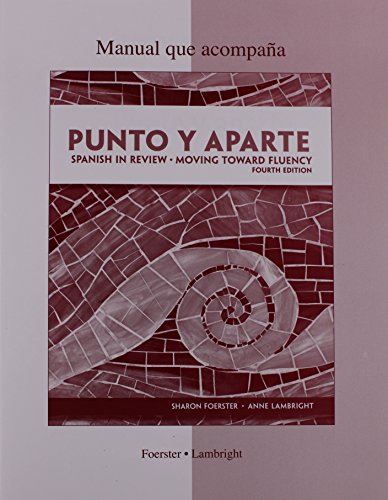 Punto y aparte moves your students beyond learning about the Spanish language to actually using their Spanish in natural, meaningful contexts. With Punto y aparte students develop more confidence for communication and begin to think critically about language and culture. This is achieved by focusing on seven communicative functions and the grammar structures that support them. These communicative functions appear at the beginning and are recycled throughout, providing opportunities for review in different contexts. Since this is not the typical linear march through grammar one structure at a time, students are able to begin using language in a way that is creative and allows for natural language production. Ultimately, students will move easily from simple sentence-level discourse to paragraph-length discourse. The title itself makes reference to this progression, since it is the Spanish expression for the beginning of a new paragraph: punto y aparte.

Sharon Wilson Foerster retired from the University of Texas at Austin in 2001, where she had been the Coordinator of Lower-Division Courses in the Department of Spanish and Portuguese, directing the first- and second-year Spanish language program and training graduate assistant instructors. She continues to teach in the Spanish Summer Language School at Middlebury College in Vermont. She received her Ph.D. in Intercultural Communications from the University of Texas in 1981. Before joining the faculty at the University of Texas, she was Director of the Center for Cross-Cultural Study in Seville, Spain, for four years. She continues her involvement in study abroad through her work as Director of the Spanish Teaching Institute and as Academic Advisor for Academic Programs International. She is the co-author of the following McGraw-Hill titles: Pasaporte: Spanish for High Beginners (2009); Supplementary Materials to accompany Puntos de partida, Eighth Edition (2009); Metas: Spanish in Review, Moving Toward Fluency (2008); Punto y aparte: Spanish in Review, Moving Toward Fluency, Third Edition (2007); Lecturas literarias: Moving Toward Linguistic and Cultural Fluency Through Literature (2007); Metas comunicativas para maestros (1999); and Metas comunicativas para negocios (1998).

Anne Lambright is Associate Professor of Modern Languages and Literature in the Hispanic Studies Program at Trinity College in Hartford, Connecticut. She earned her Ph.D. in Latin American Literature from the University of Texas at Austin. Her research and teaching focus is on contemporary Latin American Literature, Andean literature, indigenismo, and Latin American women’s writing, topics on which she has published several articles and books. She is the author of Creating the Hybrid Intellectual: Subject, Space, and the Feminine in the Narrative of José María Arguedas and co-author of Unfolding the City: Women Write the City in Latin America (2007), with Elisabeth Guerrero. In addition, she is the co-author of Metas: Spanish in Review, Moving Toward Fluency (2008).