Items related to The Economy Today (The Mcgraw-hill Series Economics) 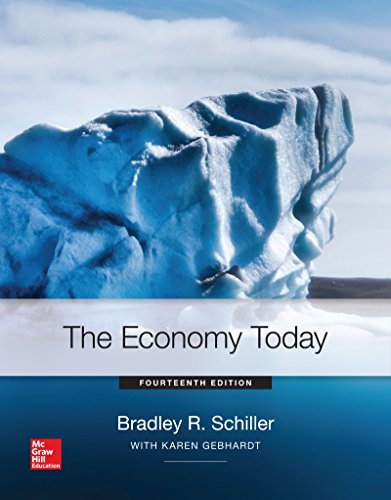 The Economy Today is noted for three great strengths: readability, policy orientation, and pedagogy. The accessible writing style engages students and brings some of the excitement of domestic and global economic news into the classroom. Schiller emphasizes how policymakers must choose between government intervention and market reliance to resolve the core issues of what, how, and for whom to produce. This strategic choice is highlighted throughout the full range of micro, macro, and international issues, and every chapter ends with a policy issue that emphasizes the markets vs. government dilemma. The authors teach economics in a relevant context, filling chapters with the real facts and applications of economic life. Schiller is also the only principles text that presents all macro theory in the single consistent context of the AS/AD framework.

The Economy Today, fourteenth edition, is thoroughly integrated with the adaptive digital tools available in McGraw-Hill’s LearnSmart Advantage Suite, proven to increase student engagement and success in the course.

Bradley R. Schiller has over four decades of experience teaching introductory economics at American University, the University of California (Berkeley and Santa Cruz), the University of Maryland, and the University of Nevada (Reno). He has given guest lectures at more than 300 colleges ranging from Fresno, California, to Istanbul, Turkey. Dr. Schiller’s unique contribution to teaching is his ability to relate basic principles to current socioeconomic problems, institutions, and public policy decisions. This perspective is evident throughout Essentials of Economics. Dr. Schiller derives this policy focus from his extensive experience as a Washington consultant. He has been a consultant to most major federal agencies, many congressional committees, and political candidates. In addition, he has evaluated scores of government programs and helped design others. His studies of income inequality, poverty, discrimination, training programs, tax reform, pensions, welfare, Social Security, and lifetime wage patterns have appeared in both professional journals and popular media. Dr. Schiller is also a frequent commentator on economic policy for television, radio, and newspapers. Dr. Schiller received his PhD from Harvard and his BA degree, with great distinction, from the University of California (Berkeley). When not teaching, writing, or consulting, Professor Schiller is typically on a tennis court, schussing down a ski slope, or enjoying the crystal blue waters of Lake Tahoe.

Karen Gebhardt is a faculty member in the Department of Economics at Colorado State University (CSU). Dr. Gebhardt has a passion for teaching economics. She regularly instructs large introductory courses in macro and microeconomics, small honors sections of these core principles courses, and upper division courses in Public Finance, Microeconomics, and International Trade, as well as a graduate course in teaching methods. She is an early adopter of technology in the classroom and advocates strongly for it because she sees the difference it makes in student engagement and learning. Dr. Gebhardt has taught online consistently since 2005 and coordinates the online program within the Department of Economics at CSU. She also supervises and mentors the department’s graduate teaching assistants and adjunct instructors. Dr. Gebhardt was the recipient of the Water Pik Excellence in Education Award in 2006 and was awarded the CSU Best Teacher Award in 2015. Dr. Gebhardt’s research interests, publications, and presentations involve the economics of human–wildlife interaction, economics education, and the economics of gender in the United States economy. Before joining CSU, she worked as an Economist at the United States Department of Agriculture/Animal and Plant Health Inspection Service/Wildlife Services/National Wildlife Research Center conducting research on the interactions of humans and wildlife, such as the economic effects of vampire bat-transmitted rabies in Mexico; the potential economic damage from the introduction of invasive species to the Islands of Hawaii; bioeconomic modeling of the impacts of wildlife-transmitted disease; and others. In her free time, Dr. Gebhardt enjoys learning about new teaching methods that integrate technology, as well as rock climbing and camping in the Colorado Rockies and beyond.

Book Description McGraw-Hill Education, 2015. Softcover. Condition: New. ***International Edition***Soft cover/Paperback*** Textbook printed in English. ***Brand New***. Most international edition has different ISBN and Cover design. Some book may show sales disclaimer such as "Not for Sale or Restricted in US" on the cover page but it is absolutely legal to use. All textbook arrives within 5-7business days. Please provides valid phone number with your order for easy delivery. Seller Inventory # 0078021863