Items related to The Power of Logic

The Power of Logic 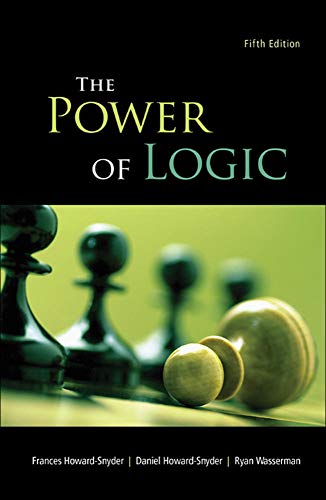 This fifth edition of The Power of Logic offers an introduction to informal logic, traditional categorical logic, and modern symbolic logic. The authors’ direct and accessible writing style, along with a wealth of engaging examples and challenging exercises, makes this an ideal text for today’s logic classes.

Instructors and students can now access their course content through the Connect digital learning platform by purchasing either standalone Connect access or a bundle of print and Connect access. McGraw-Hill Connect® is a subscription-based learning service accessible online through your personal computer or tablet. Choose this option if your instructor will require Connect to be used in the course. Your subscription to Connect includes the following:

· SmartBook® - an adaptive digital version of the course textbook that personalizes your reading experience based on how well you are learning the content.
· Access to your instructor’s homework assignments, quizzes, syllabus, notes, reminders, and other important files for the course.
· Progress dashboards that quickly show how you are performing on your assignments and tips for improvement.
· The option to purchase (for a small fee) a print version of the book. This binder-ready, loose-leaf version includes free shipping.

Complete system requirements to use Connect can be found here: http://www.mheducation.com/highered/platforms/connect/training-support-students.html

Ryan Wasserman is Associate Professor and Chair of Philosophy at Western Washington University, where he has taught since 2005. He has a PhD from Rutgers University and a BA from Western. His main philosophical interests are in metaphysics, ethics, and the philosophy of language. He has published articles in many journals, including Mind, Noûs , and Philosophical Quarterly . He is also co-editor of Metametaphysics (Oxford University Press, 2008). Apart from philosophy, Ryan spends most of his time playing with his son, Benjamin, and his daughter, Zoë Mae.

Daniel Howard-Snyder is Professor of Philosophy at Western Washington University, where he has taught since 2000. He has a PhD from Syracuse University and a BA from Seattle Pacifi c University. He is editor or co-editor of four books, The Evidential Argument from Evil (Indiana University Press, 1996), Faith, Freedom, and Rationality (Rowman & Littlefield, 1996), Divine Hiddenness (Cambridge, 2002), and The Blackwell Companion to the Problem of Evil (Blackwell 2013). He has published articles in, among other places, Philosophy and Phenomenological Research, American Philosophical Quarterly , and Faith and Philosophy . His chief love is his family―Frances, William, and Peter―without whom his life would be bereft of all joy.

Frances Howard-Snyder is Professor of Philosophy at Western Washington University, where she has taught since 1993. She has a PhD in philosophy from Syracuse University and an MA from the University of Cape Town. She has published articles on topics in normative ethics, philosophy of religion, and metaphysics in T he Journal of Philosophy , A merican Philosophical Quarterly , and Philosophical Studies , among other places . When she is not doing philosophy, she most especially enjoys spending time with her husband, Dan, and her twins, Peter and William.

1. The Power of Logic

2. The Power of Logic

3. The Power of Logic

4. The Power of Logic

5. The Power of Logic

6. The Power of Logic