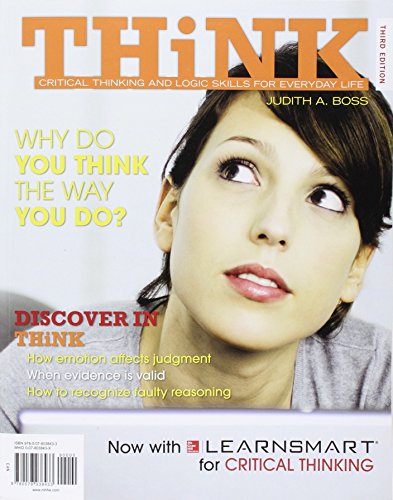 THiNK offers instructors core content and pedagogy in a succinct magazine format that teaches them the importance of overcoming feelings and opinions to commit to positions based on reason and logic. Boss’s 3rd edition is powered by Connect Critical Thinking, a state of the art digital learning environment that helps you connect your students to their coursework. Whether accessing online homework and quizzes, or assigning SmartBook and LearnSmart, the first and only adaptive learning experience, Connect provides a complete digital solution for your classroom. With extensive opportunity for application and practice, and groundbreaking digital content, THiNK directs students to make connections between skill development and apply it to their college studies, careers, and personal lives.

Instructors and students can now access their course content through the Connect digital learning platform by purchasing either standalone Connect access or a bundle of print and Connect access. McGraw-Hill Connect® is a subscription-based learning service accessible online through your personal computer or tablet. Choose this option if your instructor will require Connect to be used in the course. Your subscription to Connect includes the following:

· SmartBook® - an adaptive digital version of the course textbook that personalizes your reading experience based on how well you are learning the content.
· Access to your instructor’s homework assignments, quizzes, syllabus, notes, reminders, and other important files for the course.
· Progress dashboards that quickly show how you are performing on your assignments and tips for improvement.
· The option to purchase (for a small fee) a print version of the book. This binder-ready, loose-leaf version includes free shipping.

Complete system requirements to use Connect can be found here: http://www.mheducation.com/highered/platforms/connect/training-support-students.html

Judith A. Boss earned her PhD in 1990 from Boston University, her MA from Dalhousie University in Canada in 1971, and her BA from the University of Western Australia in 1969. Prior to pursing a career in academia, she worked as a writer/researcher for the Nova Scotia Museum. She was on the faculty of the Department of Philosophy at the University of Rhode Island from 1988 to 1995 and worked as Assistant Director of Curriculum Affairs at Brown University School of Medicine until 2004, when she "retired" to return to full-time writing. She remained at Brown University as a visiting scholar with the philosophy department for several years while working on her textbooks. In addition to her philosophical interests, she completed a MS in Human Development at URI in 1991 and has led faculty workshops and written extensively on the topic of college student development. She was recipient of a URI Foundation Grant to study the effects of community service learning on students' moral development and has served as a grant application reviewer for the Corporation for National Service. The author of nine books, her publications include ANALYZING MORAL ISSUES and ETHICS FOR LIFE, both with McGraw-Hill. Her textbook THiNK, also with McGraw-Hill, just came out in 2009. She is published in, among other, The Journal of Moral Education, Public Affairs Quarterly, The Journal of Medical Ethics, Academic Medicine, Educational Theory, Free Inquiry, and The Journal of Experiential Education. During her spare time she volunteers with the U.S. Fish and Wildlife Services and is active in the Appalachian Mountain Club. An avid traveler, she has traveled with students from the University of Rhode Island and Brown Medical School to work with underserved, indigenous people in Guatemala and Mexico. Her favorite travel destination, however, is Antarctica, and Blue Ice, a suspense/thriller she wrote that is set in Antarctica, is coming out in print next year. She lives in Rhode Island with her daughter, son-in-law and twin granddaughters.