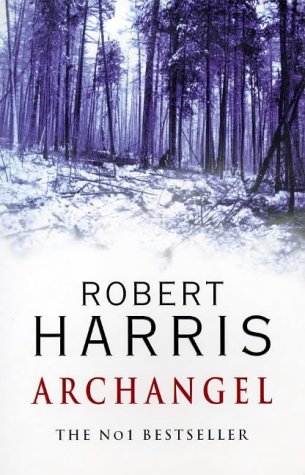 Fluke Kelso is a dissipated, middle-aged, former Oxford historian, who is in Moscow to attend a conference on newly-opened Soviet archives. Kelso is visited at his hotel by an old NKVD officer and bodyguard, who claims to have been at Stalin's dacha on the night Stalin had his fatal stroke.

Archangel is a remarkably literate novel--and simultaneously a gripping thriller--that explores the lingering presence of Stalin amidst the corruption of modern-day Russia. Robert Harris (whose previous works include Enigma and Fatherland) elevates his tale by choosing a narrator with an outsider's perspective but an insider's knowledge of Soviet history: Fluke Kelso, a middle-aged scholar of Soviet Communism with a special interest in the dark secrets of Joseph Stalin. For years, rumors have circulated about a notebook that the aging dictator kept in his final years. In a chance encounter in Moscow, Kelso meets Papu Rapava, a former NKVD guard who claims that he was at Stalin's deathbed and says that he assisted Politburo member Beria in hiding the black oilskin notebook just as Stalin was passing. Before Kelso can get more details, Rapava disappears, but the scholar is energized by the evidence Rapava has provided. As Kelso begins to pursue his historical prize, however, his investigation ensnares him in a living web of Stalinist terror and murder. It soon becomes clear that the notebook is the key to a doorway hiding many secrets, old and new.

Harris's understanding of Soviet and modern Russian is impressive. The novel rests on a seamless blend of fact and fiction that places real figures from Soviet history alongside Kelso and his fictional colleagues. Especially disturbing are the transcripts from interrogations and the excerpt from Kelso's lectures on Stalin; the documents provide chilling evidence to support Kelso's claim: "There can now be no doubt that it is Stalin rather than Hitler who is the most alarming figure of the twentieth century." --Patrick O'Kelley

Present-day Russia is the setting for this stunning new novel from Robert Harris, author of the bestsellers Fatherland and Enigma.

Archangel tells the story of four days in the life of Fluke Kelso, a dissipated, middle-aged former Oxford historian, who is in Moscow to attend a conference on the newly opened Soviet archives.

One night, Kelso is visited in his hotel room by an old NKVD officer, a former bodyguard of the secret police chief Lavrenty Beria. The old man claims to have been at Stalin's dacha on the night Stalin had his fatal stroke, and to have helped Beria steal the dictator's private papers, among them a notebook.

Kelso decides to use his last morning in Moscow to check out the old man's story. But what starts as an idle inquiry in the Lenin Library soon turns into a murderous chase across nighttime Moscow and up to northern Russia - to the vast forests near the White Sea port of Archangel, where the final secret of Josef Stalin has been hidden for almost half a century.

Archangel combines the imaginative sweep and dark suspense of Fatherland with the meticulous historical detail of Enigma. The result is Robert Harris's most compelling novel yet.