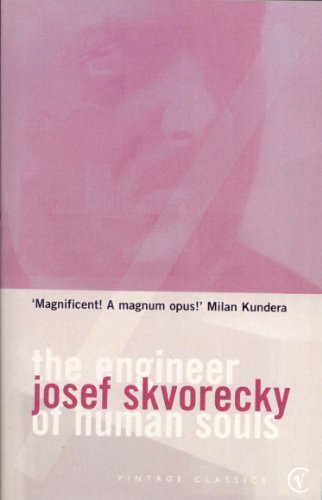 THE ENGINEER OF HUMAN SOULS spins its own story from the torn entrails of Central Europe. yet what emerges is comedy - clack, grimacing and explosively funny, as peculiarly middle European as the despairing wit of prague's own Franz Kafka' Time

Josef Skvorecky is the author of "The Cowards," "The Bass Saxophone," "The Engineer of Human Souls," and "Dvorak in Love," among other works. He is the winner of Canada's Governor General's Award. He and his wife, Zdena, divide their time between Toronto and Venice, Florida.

From Chapter 1: Outside the window, which is high, narrow and gothic, the cold Canadian wind blends two whitenesses: snowflakes sifting down from lowering clouds and snowdust lifted and whirled by the wind from the land stretching southwards to Lake Ontario. The snow swirls through a white wasteland broken only by a fe bare, blackened trees.Edenvale College stands in a wilderness. In a few years the nearby town of Mississauga is expected to swell and envelop the campus with more variety and colour, but for the time being the college stands in a wilderness, two and a half miles from the nearest housing development. The houses there are no longer all alike: people have learned something since George F. Babbit's time. Perhaps it was literature that taught them. Now there are at least four different kinds of bungalow spaced at irregular intervals so that the housing development looks like a Swiss village in one of those highly stylized paintings. It is pretty to look at. But I see it only in my mind's eye, as I look out on the white, cold, windy Canadian landscape. Often, as my thoughts flow, I conjure up again the wonderful things I have seen in this country of cities with no past. Like the Toronto skyline with its black and white skyscrapers, some plated with golden mirrors, thrusting their peaks in to the haze, glowing like burnished chessboards against the evening twilight above the flat Ontario landscape, and beyond them a sun as large as Jupiter and as red as an aniline ruby sinking into the green dusk. God knows why it's so green, but it is. The Toronto skyline is more beautiful to me than the familiar silhouette of Prague Castle. There is beauty everywhere on earth, but there is greater beauty in those places where one feels that sense of ease which comes from no longer having to put off one's dreams until some improbable future--a future inexorably shrinking away; where the fear which has pervaded one's life suddenly vanishes because there is nothing to be afraid of. Gone are the fears I shared with my fellows, for although the Party exists here, it has no power as yet. And my personal fears are gone too, for no professional literary critics in Canada will confine me in arbitrary scales of greatness. My novels, published here in Czech by Mrs. Santner's shoestring operation, are widely read by my fellow Czechs but hardly ever reviewed, because there is no one to review them. There are those two or three grateful laymen who lavish praises on them in the emigre press, their flatteries sandwiched between harvest home announcements and ads for Bohemian tripe soup; they are literate, but they do not understand literature. Then there is Professor Koupelna in Saskatchewan. Every once in a while Passer's mail-order firm in Chicago sends him one of my books as a free gift along with his order of homemade jelly and Prague ham. The book arouses a savage and instinctive outrage in the good professor which he mistakes for the spirit of criticism and he fires off a broadside to the journal of the Czechoslovak Society for Arts and Sciences in America. Fortunately, his attack is launched from such a pinnacle of erudition that most Society members find it repellent. And his erudition has so many gaps in it that even those who are not repelled remain unconvinced. I feel wonderful. I feel utterly and dangerously wonderful in this wilderness land.

The Engineer Of Human Souls: An Entertainment on the Old Themes of Life,Women,Fate,Dreams,the Working Class, Secret Agents,Love and Death (Vintage Classics)