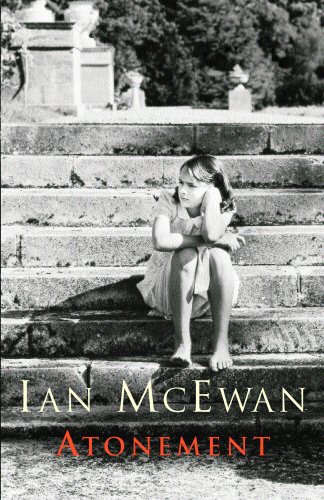 The novel opens on a sweltering summer day in 1935 at the Tallis family’s mansion in the Surrey countryside. Thirteen-year-old Briony has written a play in honor of the visit of her adored older brother Leon; other guests include her three young cousins -- refugees from their parent’s marital breakup -- Leon’s friend Paul Marshall, the manufacturer of a chocolate bar called “Amo” that soldiers will be able to carry into war, and Robbie Turner, the son of the family charlady whose brilliantly successful college career has been funded by Mr. Tallis. Jack Tallis is absent from the gathering; he spends most of his time in London at the War Ministry and with his mistress. His wife Emily is a semi-invalid, nursing chronic migraine headaches. Their elder daughter Cecilia is also present; she has just graduated from Cambridge and is at home for the summer, restless and yearning for her life to really begin. Rehearsals for Briony’s play aren’t going well; her cousin Lola has stolen the starring role, the twin boys can’t speak the lines properly, and Briony suddenly realizes that her destiny is to be a novelist, not a dramatist.

In the midst of the long hot afternoon, Briony happens to be watching from a window when Cecilia strips off her clothes and plunges into the fountain on the lawn as Robbie looks on. Later that evening, Briony thinks she sees Robbie attacking Cecilia in the library, she reads a note meant for Cecilia, her cousin Lola is sexually assaulted, and she makes an accusation that she will repent for the rest of her life.

The next two parts of Atonement shift to the spring of 1940 as Hitler’s forces are sweeping across the Low Countries and into France. Robbie Turner, wounded, joins the disastrous British retreat to Dunkirk. Instead of going up to Cambridge to begin her studies, Briony has become a nurse in one of London’s military hospitals. The fourth and final section takes place in 1999, as Briony celebrates her 77th birthday with the completion of a book about the events of 1935 and 1940, a novel called Atonement.

In its broad historical framework Atonement is a departure from McEwan’s earlier work, and he loads the story with an emotional intensity and a gripping plot reminiscent of the best nineteenth-century fiction. Brilliant and utterly enthralling in its depiction of childhood, love and war, England and class, the novel is a profoundly moving exploration of shame and forgiveness and the difficulty of absolution.
From the Trade Paperback edition.

Ian McEwan's Booker Prize-nominated Atonement is his first novel since Amsterdam took home the prize in 1998. But while Amsterdam was a slim, sleek piece, Atonement is a more sturdy, more ambitious work, allowing McEwan more room to play, think, and experiment.

We meet 13-year-old Briony Tallis in the summer of 1935, as she attempts to stage a production of her new drama "The Trials of Arabella" to welcome home her older, idolized brother Leon. But she soon discovers that her cousins, the glamorous Lola and the twin boys Jackson and Pierrot, aren't up to the task, and directorial ambitions are abandoned as more interesting prospects of preoccupation come onto the scene. The charlady's son, Robbie Turner, appears to be forcing Briony's sister Cecilia to strip in the fountain and sends her obscene letters; Leon has brought home a dim chocolate magnate keen for a war to promote his new "Army Ammo" chocolate bar; and upstairs, Briony's migraine-stricken mother Emily keeps tabs on the house from her bed. Soon, secrets emerge that change the lives of everyone present....

The interwar, upper-middle-class setting of the book's long, masterfully sustained opening section might recall Virginia Woolf or Henry Green, but as we move forward--eventually to the turn of the 21st century--the novel's central concerns emerge, and McEwan's voice becomes clear, even personal. For at heart, Atonement is about the pleasures, pains, and dangers of writing, and perhaps even more, about the challenge of controlling what readers make of your writing. McEwan shouldn't have any doubts about readers of Atonement: this is a thoughtful, provocative, and at times moving book that will have readers applauding. --Alan Stewart, Amazon.co.uk

On the hottest day of the summer of 1935, thirteen-year-old Briony Tallis sees her older sister Cecilia strip off her clothes and plunge into the fountain in the garden of their country house. Watching Cecilia is their housekeeper's son Robbie Turner, a childhood friend who, along with Briony's sister, has recently graduated from Cambridge.
By the end of that day the lives of all three will have been changed forever. Robbie and Cecilia will have crossed a boundary they had never before dared to approach and will have become victims of the younger girl's scheming imagination. And Briony will have committed a dreadful crime, the guilt for which will color her entire life.
In each of his novels Ian McEwan has brilliantly drawn his reader into the intimate lives and situations of his characters. But never before has he worked with so large a canvas: In "Atonement he takes the reader from a manor house in England in 1935 to the retreat from Dunkirk in 1941; from the London's World War II military hospitals to a reunion of the Tallis clan in 1999.
"Atonement is Ian McEwan's finest achievement. Brilliant and utterly enthralling in its depiction of childhood, love and war, England and class, the novel is at its center a profound-and profoundly moving-exploration of shame and forgiveness and the difficulty of absolution.