Items related to Bringing Down the House

Mezrich, Ben Bringing Down the House

Bringing Down the House 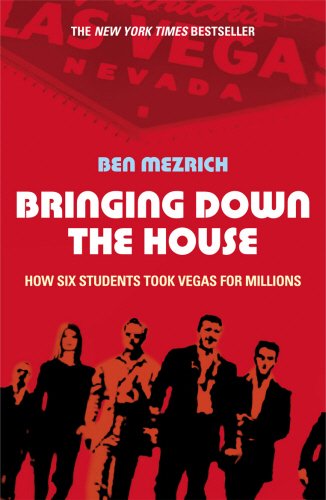 "In this high-octane tale with rich, sharp dialogue bordering on Elmore Leonard turf, the plot races by at a Nascar pace and the characters on both sides of the table are as real as an inside straight, making their moves and planning their scores like a croupier on speed. Take the odds, bet the bank, and stare down the dealer. Bringing Down the House is a can’t-miss deal." –Lorenzo Carcaterra, author of Gangster and Street Boys

"Ben Mezrich takes us where every man dreams of going but precious few ever have—beating the casino. In this rollicking truth-is-stranger-than-fiction tale, Robin Hood meets the Rat Pack as the hero steals from the rich and gives, um, to himself. Odds are you’ll love it." —Michael Capuzzo, New York Times bestselling author of Close to Shore

1. Bringing Down the House

Book Description Arrow, 2003. Paperback. Condition: Used; Good. **SHIPPED FROM UK** We believe you will be completely satisfied with our quick and reliable service. All orders are dispatched as swiftly as possible! Buy with confidence!. Seller Inventory # mon0000857010

2. Bringing Down The House

Book Description Paperback. Condition: Very Good. The book has been read, but is in excellent condition. Pages are intact and not marred by notes or highlighting. The spine remains undamaged. Seller Inventory # GOR004032093

3. Bringing Down the House

Book Description Arrow Books Ltd, 2003. Paperback. Condition: Used; Good. **Simply Brit** Shipped with Premium postal service within 24 hours from the UK with impressive delivery time. We have dispatched from our book depository; items of good condition to over ten million satisfied customers worldwide. We are committed to providing you with reliable and efficient service at all times. Seller Inventory # mon0001669714

4. BRINGING DOWN THE HOUSE - THE INSIDE STORY OF SIX MIT STUDENTS WHO TOOK VEGAS FOR MILLIONS

5. Bringing down the House : The Inside Story of Six M. I. T. Students Who Took Vegas for Millions

6. Bringing Down the House: The Inside Story of Six M.I.T. Students Who Took Vegas

Book Description Atria Books, 2003. Paperback. Condition: Very Good. FREE delivery upgrade - If you live in the USA this item will arrive in 4 to 6 business days when you choose the lowest cost shipping method when checking out. Very good condition. Interior is tight and bright. Binding is solid and strong. Paperback cover is clean. Moderate scuffing, corner bumps and/or creases on the paperback covers due to shelf and reader wear. 100% Satisfaction Guaranteed. All items are carefully enclosed with bubble wrap. We ship promptly and worldwide via US Post and will email you a tracking number. Seller Inventory # SKU0057622b