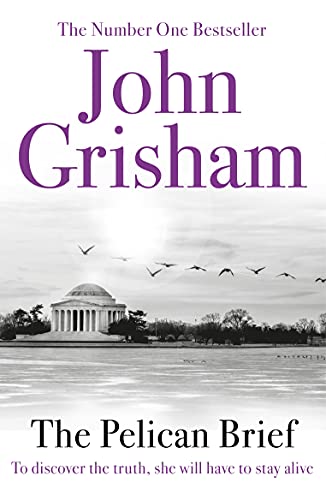 Anthony Heald gives an uncommonly compelling performance narrating this fast-paced legal thriller. The action begins with the fierce assassinations of two Supreme Court justices. Too unlikely to be coincidental, the murders have no identifiable connection until a young law student uncovers a hidden link, exposing herself and those around her to deadly consequences. Heald uses the flexibility of his voice to conjure up a large cast of diverse characters. He crafts his delivery expertly, heightening the already substantial suspense and carrying the story to its dramatic conclusion. (Running time: 6 hours, 4 cassettes) --George Laney

In suburban Georgetown a killer's Reeboks whisper on the front floor of a posh home... In a seedy D.C. porno house a patron is swiftly garroted to death... The next day America learns that two of its Supreme Court justices have been assassinated. And in New Orleans, a young law student prepares a legal brief... To Darby Shaw it was no more than a legal shot in the dark, a brilliant guess. To the Washington establishment it was political dynamite. Suddenly Darby is witness to a murder -- a murder intended for her. Going underground, she finds there is only one person she can trust -- an ambitious reporter after a newsbreak hotter than Watergate -- to help her piece together the deadly puzzle. Somewhere between the bayous of Louisiana and the White House's inner sanctums, a violent cover-up is being engineered. For somone has read Darby's brief. Someone who will stop at nothing to destroy the evidence of an unthinkable crime.

"A fast-paced thriller... it's got the unmistakable Grisham style -- conspiracy in high places, evil and innocent lawyers, assassins and a plot that will keep you reading into the small hours of the morning." -- The Cincinnati Post.

Book Description Paperback. Condition: New. Language: English. Brand new Book. _______________________________________Two Supreme Court Justices are dead, their murders unsolved.But one woman might have found the answer - if she can live to tell it.Darby Shaw is a brilliant New Orleans legal student with a sharp political mind. For her own amusement, she draws up a legal brief showing how the judges might have been murdered for political reasons, and shows it to her professor. He shows it to his friend, an FBI lawyer.Then the professor dies in a car bombing.And Darby realises that her brief, which pointed to a vast presidential conspiracy, might be right. Someone is intent on silencing Darby for good - somebody who will stop at nothing to preserve the secrets of the Pelican Brief._______________________________________'A master at the art of deft characterisation and the skilful delivery of hair-raising crescendos' - Irish Independent'John Grisham is the master of legal fiction' - Jodi Picoult'The best thriller writer alive' - Ken Follett'John Grisham has perfected the art of cooking up convincing, fast-paced thrillers' - Telegraph 'Grisham is a superb, instinctive storyteller' - The Times'Grisham's storytelling genius reminds us that when it comes to legal drama, the master is in a league of his own.' - Daily Record'Masterful - when Grisham gets in the courtroom he lets rip, drawing scenes so real they're not just alive, they're pulsating' - Mirror'A giant of the thriller genre' - TimeOut. Seller Inventory # AAZ9780099537168

Book Description Paperback. Condition: new. Paperback. Reissue with new covers. Two Supreme Court Justices are dead. Their murders remain unsolved. Darby Shaw, a brilliant New Orleans legal student, draws up a speculative legal brief which links the deaths and uncovers an astonishing presidential conspiracy. When her boyfriend is atomised in a car bomb, it becomes clear that somebody is intent on silencing Darby for good. Shipping may be from multiple locations in the US or from the UK, depending on stock availability. Seller Inventory # 9780099537168

Shipping: US$ 5.46
From United Kingdom to U.S.A.
Destination, rates & speeds

Shipping: US$ 8.89
From United Kingdom to U.S.A.
Destination, rates & speeds