Items related to An Officer & A Spy

Harris, Robert An Officer & A Spy

An Officer & A Spy 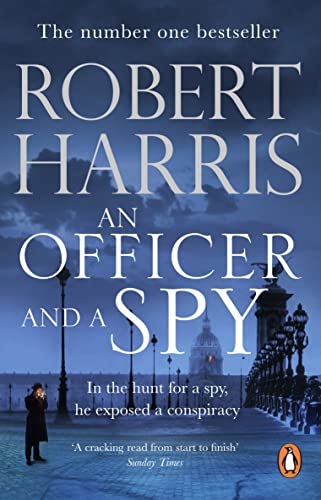 Officer and a Spy

An Amazon Best Book of the Month, February 2014: A spy thriller and psychological examination, Robert Harris’s An Officer and a Spy looks at the infamous Dreyfus affair through the personage of a functionary-turned-whistle-blower. It’s Paris, 1895. A Jewish army officer, Alfred Dreyfus, has been convicted of treason and is imprisoned on Devil’s Island; he has been publicly humiliated, bound in chains, banished to solitary confinement. But was he really a spy for Germany--or was his fate sealed because he was a Jew in an anti-Semitic time and place? Slowly, the petit bureaucrat Georges Picquart begins to suspect that Dreyfus--portrayed here mostly through heart-wrenching real-life letters he wrote from prison to his beloved family--has been scapegoated. As Picquart amasses more and more evidence about Dreyfus, he also must come to terms with some of his own behaviors and attitudes. Still, for all its delicious detail about the mores of Belle Epoque Paris, both social and political, this novel is also one for the ages, or at least for the ages in which powerful intelligence agencies, government surveillance and cover-ups are worrisomely becoming the norm. --Sara Nelson

Robert Harris's work has been translated into thirty-seven languages, and he is a Fellow of the Royal Society of Literature. He has been a television correspondent for the BBC, political editor of The Observer, and a columnist for The Sunday Times and The Daily Telegraph. He lives in a village near Hungerford in Berkshire, England.

1. An Officer and a Spy: The gripping Richard and Judy Book Club favourite (Paperback)

Book Description Cornerstone, United Kingdom, 2014. Paperback. Condition: New. Language: English. Brand new Book. IN THE HUNT FOR A SPY, HE EXPOSED A CONSPIRACY***Winner of the 2014 Walter Scott Prize for Historical Fiction*** Paris, 1895: an army officer, Georges Picquart, watches a convicted spy, Alfred Dreyfus, being publicly humiliated in front of a baying crowd.Dreyfus is exiled for life to Devil's Island; Picquart is promoted to run the intelligence unit that tracked him down.But when Picquart discovers that secrets are still being handed over to the Germans, he is drawn into a dangerous labyrinth of deceit and corruption that threatens not just his honour but his life.A breathtaking historical spy thriller from Robert Harris, author of Munich, Conclave and the acclaimed Cicero trilogy. Seller Inventory # AAZ9780099580881

5. Officer and a Spy (Paperback)

Book Description 2014. Paperback. Condition: New. Paperback. IN THE HUNT FOR A SPY, HE EXPOSED A CONSPIRACY***Winner of the 2014 Walter Scott Prize for Historical Fiction*** Paris, 1895- an army officer, Georges Picquart, watches a convicted spy, Al.Shipping may be from multiple locations in the US or from the UK, depending on stock availability. 624 pages. 0.432. Seller Inventory # 9780099580881

8. An Officer and a Spy: The gripping Richard and Judy Book Club favourite

9. An Officer and a Spy (Paperback)