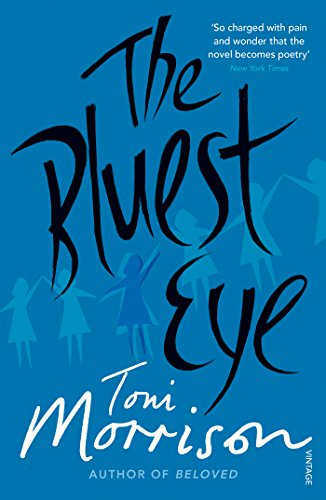 THE BLUEST EYE chronicles the tragic, torn lives of a poor black family in 1940s Ohio: Pauline, Cholly, Sam and Pecola. Pecola, unlovely and unloved, prays each night for blue eyes like those of her privileged blond white schoolfellows. She becomes the focus of the mingled love and hatred engendered by her family's frailty and the world's cruelty as the novel moves toward a savage but poignant resolution.

Book Description Vintage Publishing, United Kingdom, 1999. Paperback. Condition: New. Language: English. Brand new Book. Read the searing first novel from the celebrated author of Beloved, which immerses us in the tragic, torn lives of a poor black family in post-Depression 1940s Ohio. Unlovely and unloved, Pecola prays each night for blue eyes like those of her privileged white schoolfellows. At once intimate and expansive, unsparing in its truth-telling, The Bluest Eye shows how the past savagely defines the present. A powerful examination of our obsession with beauty and conformity, Toni Morrison's virtuosic first novel asks powerful questions about race, class, and gender with the subtlety and grace that have always characterised her writing.'She revealed the sins of her nation, while profoundly elevating its canon. She suffused the telling of blackness with beauty, whilst steering us away from the perils of the white gaze. That's why she told her stories. And why we will never, ever stop reading them' Afua Hirsch 'Discovering a writer like Toni Morrison is rarest of pleasures' Washington Post'When she arrived, with her first novel, The Bluest Eye, she immediately re-ordered the American literary landscape' Ben Okri Winner of the PEN/Saul Bellow award for achievement in American fiction. Seller Inventory # AAZ9780099759911

Book Description Vintage. Condition: New. 1999. First Thus. Paperback. A novel that immerses us in the tragic, torn lives of a poor black family - Pauline, Cholly, Sam and Pecola - in post-Depression 1940s Ohio. It shows how the past savagely defines the present. Unlovely and unloved, Pecola prays each night for blue eyes like those of her privileged white schoolfellows. Num Pages: 224 pages. BIC Classification: FA. Category: (G) General (US: Trade). Dimension: 198 x 129 x 12. Weight in Grams: 166. . . . . . Books ship from the US and Ireland. Seller Inventory # V9780099759911

Book Description 1999. Paperback. Condition: New. Paperback. THE BLUEST EYE chronicles the tragic, torn lives of a poor black family in 1940s Ohio: Pauline, Cholly, Sam and Pecola. Pecola, unlovely and unloved, prays each night for blue.Shipping may be from our Sydney, NSW warehouse or from our UK or US warehouse, depending on stock availability. 240 pages. 0.210. Seller Inventory # 9780099759911