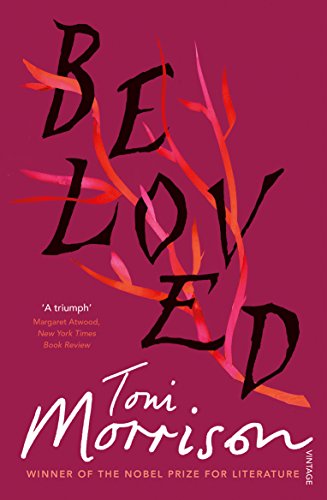 It is the mid-1800s. At Sweet Home in Kentucky, an era is ending as slavery comes under attack from the abolitionists. The worlds of Halle and Paul D. are to be destroyed in a cataclysm of torment and agony. The world of Sethe, however, is to turn from one of love to one of violence and death - the death of Sethe's baby daughter Beloved, whose name is the single word on the tombstone, who died at her mother's hands, and who will return to claim retribution.

As with the ghost at its center, Beloved has taken many forms--from the Pulitzer Prize-winning novel to Oprah Winfrey's decade-in-the-making movie to this challenging audiobook read by Lynn Whitfield. Whitfield, who won an Emmy Award playing the title role in The Josephine Baker Story, has a tough assignment as she guides us back and forth in time with Sethe, an escaped slave who's still shackled by memories of her murdered child. But, as we shift between Sethe's brutal plantation days and her haunted life immediately after the Civil War, we learn one secret after another until, finally, past and present are masterfully reconciled. (Running time: three hours, two cassettes) --Kimberly Heinrichs

Toni Morrison--author of Song of Solomon and Tar Baby--is a writer of remarkable powers: her novels, brilliantly acclaimed for their passion, their dazzling language and their lyric and emotional force, combine the unassailable truths of experience and emotion with the vision of legend and imagination.
It is the story--set in post-Civil War Ohio--of Sethe, an escaped slave who has risked death in order to wrench herself from a living death; who has lost a husband and buried a child; who has borne the unthinkable and not gone mad: a woman of "iron eyes and backbone to match." Sethe lives in a small house on the edge of town with her daughter, Denver, her mother-in-law, Baby Suggs, and a disturbing, mesmerizing intruder who calls herself Beloved.
Sethe works at "beating back the past," but it is alive in all of them. It keeps Denver fearful of straying from the house. It fuels the sadness that has settled into Baby Suggs' "desolated center where the self that was no self made its home." And to Sethe, the past makes itself heard and felt incessantly: in memories that both haunt and soothe her...in the arrival of Paul D ("There was something blessed in his manner. Women saw him and wanted to weep"), one of her fellow slaves on the farm where she had once been kept...in the vivid and painfully cathartic stories she and Paul D tell each other of their years in captivity, of their glimpses of freedom...and, most powerfully, in the apparition of Beloved, whose eyes are expressionless at their deepest point, whose doomed childhood belongs to the hideous logic of slavery and who, as daughter, sister and seductress, has now come from the "place over there" to claim retribution for what shelost and for what was taken from her.
Sethe's struggle to keep Beloved from gaining full possession of her present--and to throw off the long, dark legacy of her past--is at the center of this profoundly affecting and startling novel. But its intensity and resonance of feeling, and the boldness of its narrative, lift it beyond its particulars so that it speaks to our experience as an entire nation with a past of both abominable and ennobling circumstance.
In Beloved, Toni Morrison has given us a great American novel.
Toni Morrison was awarded the 1988 Pulitzer Prize in Literature for Beloved.