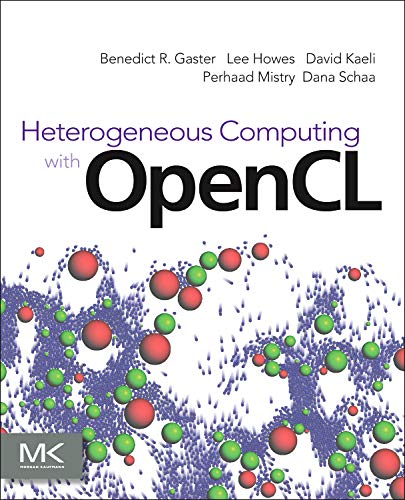 Heterogeneous Computing with OpenCL teaches OpenCL and parallel programming for complex systems that may include a variety of device architectures: multi-core CPUs, GPUs, and fully-integrated Accelerated Processing Units (APUs) such as AMD Fusion technology. Designed to work on multiple platforms and with wide industry support, OpenCL will help you more effectively program for a heterogeneous future.

Written by leaders in the parallel computing and OpenCL communities, this book will give you hands-on OpenCL experience to address a range of fundamental parallel algorithms. The authors explore memory spaces, optimization techniques, graphics interoperability, extensions, and debugging and profiling. Intended to support a parallel programming course, Heterogeneous Computing with OpenCL includes detailed examples throughout, plus additional online exercises and other supporting materials.

Benedict R. Gaster is a software architect working on programming models for next-generation heterogeneous processors, in particular looking at high-level abstractions for parallel programming on the emerging class of processors that contain both CPUs and accelerators such as GPUs. Benedict has contributed extensively to the OpenCL's design and has represented AMD at the Khronos Group open standard consortium. Benedict has a Ph.D in computer science for his work on type systems for extensible records and variants.

Lee Howes has spent the last two years working at AMD and currently focuses on programming models for the future of heterogeneous computing. Lee's interests lie in declaratively representing mappings of iteration domains to data and in communicating complicated architectural concepts and optimizations succinctly to a developer audience, both through programming model improvements and education. Lee has a Ph.D. in computer science from Imperial College London for work in this area.

Dr. Kaeli has co-authored more than 200 critically reviewed publications. His research spans a range of areas including microarchitecture to back-end compilers and software engineering. He leads a number of research projects in the area of GPU Computing. He presently serves as the Chair of the IEEE Technical Committee on Computer Architecture. Dr. Kaeli is an IEEE Fellow and a member of the ACM.

Perhaad Mistry works in AMD’s developer tools group at the Boston Design Center focusing on developing debugging and performance profiling tools for heterogeneous architectures. He is presently focused on debugger architectures for upcoming platforms shared memory and discrete Graphics Processing Unit (GPU) platforms. Perhaad has been working on GPU architectures and parallel programming since CUDA 0.8 in 2007. He has enjoyed implementing medical imaging algorithms for GPGPU platforms and architecture aware data structures for surgical simulators. Perhaad's present work focuses on the design of debuggers and architectural support for performance analysis for the next generation of applications that will target GPU platforms.

Dana Schaa received a BS in Computer Engineering from Cal Poly, San Luis Obispo, and an MS and PhD in Electrical and Computer Engineering from Northeastern University. He works on GPU architecture modeling at AMD, and has interests and expertise that include memory systems, microarchitecture, performance analysis, and general purpose computing on GPUs. His background includes the development OpenCL-based medical imaging applications ranging from real-time visualization of 3D ultrasound to CT image reconstruction in heterogeneous environments. Dana married his wonderful wife Jenny in 2010, and they live together in San Jose with their charming cats.

"With parallel computing now in the mainstream, this book provides an excellent reference on the state-of-the-art techniques in accelerating applications on CPU-GPU systems."--David A. Bader, Georgia Institute of Technology

"Intended for software architects and engineers, this guide to OpenCL examines potential uses and practical application of the cross platform programming language for heterogeneous computing. The work explores the use of OpenCL to design and produce scalable applications that have the ability to be optimized for processor core and GPU usage. Chapters cover an overview of OpenCL, basic examples, CPU/GPU implementation and extensions. Illustrations and sample code, as well as sections outlining case studies for the use of OpenCL in several common situations, are provided."--SciTech Book News