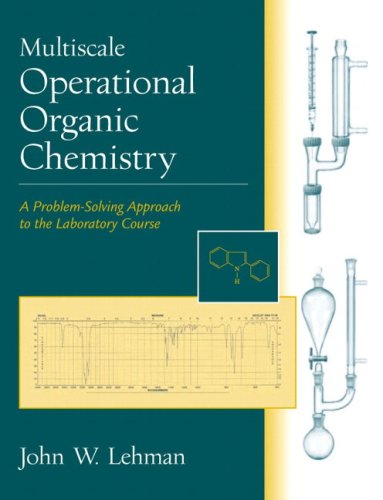 This practical laboratory book provides both microscale and multiscale experiments. It encourages readers to think in the laboratory by solving a scientific problem in the process of carrying out an experiment. An “operational” approach is featured, equipping readers to master the major lab operations as they carry out problem solving experiments. Over 400 problems and exercises are provided. A valuable reference for organic chemists and chemical technicians.

This book is a multiscale laboratory textbook based on the third edition of Operational Organic Chemistry. -A Problem-Solving Approach to the Laboratory Course. Every experiment and minilab can be performed by students using either standard scale glassware, such as that available in an organic chemistry lab kit with 19/22 standard-taper joints, or microscale glassware, such as that in a microscale lab kit with 14hO standard-taper joints and threaded connectors. Most of the microscale experiments could be performed successfully with alternative microscale glassware, such as that provided in a Williamson lab kit (described in Microscale and Macroscale Organic Experiments, D.C. Heath and Co.). However, some might need to be scaled down further, and the instructor would have to provide additional instructions regarding the use of the glassware.

Some organic chemists regard a microscale experiment as one involving approximately 0.1 g of the limiting reactant. Dealing with such small quantities can be discouraging to students with standard scale fingers, who tend to end up with a drop or a few grains of product, if any. I have adopted a more flexible definition of a microscale experiment as one that can be performed with the glassware available in a typical microscale lab.

In writing this textbook, I have been guided by my convictions that students (1) perform better in the organic laboratory course if they master the major lab operations early and apply them throughout, (2) learn organic chemistry better if they keep their minds engaged by approaching each experiment as a problem-solving exercise, and (3) perform any task better if they are sufficiently motivated.

Part I of this book is devoted to experiments designed to teach the basic laboratory operations, where an operation, as used here, is a process that uses one or more basic lab techniques-such as heating, cooling, or vacuum filtration-to accomplish some end, such as the purification of a solid. Once students have mastered the major operations by completing the appropriate experiments in Part I, they should be ready to apply those operations in Part II, which contains a large selection of experiments that are correlated with topics found in most organic chemistry lecture textbooks. This operational approach helps students understand that an organic synthesis, for example, is not a unique phenomenon that can be experienced only by mechanically following a detailed "recipe." Rather, it is the outcome of a logical sequence of interrelated operations adapted to the requirements of the synthesis.

In addition to teaching lab skills, the experiments in this book are designed to help students develop the observational and critical thinking skills that are essential prerequisites for a successful career in science and in virtually every other profession. From the student's viewpoint, the purpose of each major experiment is the solution of a problem through the application of scientific methodology. Before each experiment, the student must first define the problem based on information provided in a hypothetical Scenario. After a preliminary reading of the experiment, the student should be able to develop a working hypothesis regarding its outcome. During the experiment, the student gathers and evaluates evidence bearing on the problem and, as necessary, reevaluates and revises the hypothesis based on experimental observations and data. Finally, the student tests the hypothesis by obtaining a melting point, a spectrum, a gas chromatogram, or by some other means, and arrives at a conclusion. Because of the level at which most undergraduate organic chemistry are taught, the problems must, of necessity, be kept relatively simple and (with a few exceptions) should not be compared to "real" research problems tackled by professional chemists. It is not the intent of this book to make every student a research chemist; most students who take an organic chemistry course have no intention of going into the field. But the critical thinking and methodological skills required to solve the problems are comparable to those applied by research scientists and should give the student a better understanding of the nature and practice of science.

As a motivational device and to provide a frame of reference for the experiments, students are asked to regard themselves as "consulting chemists" working for an institute operated by their college or university. Various individuals and organizations come to the institute with their scientific problems, and the problems are relayed to the "project group" comprising each lab section, to be solved individually or through collaboration. Although some of the Scenarios are a bit contrived, most of them describe the kinds of tasks a practicing chemist might be called upon to perform.

To implement this problem-solving approach in the organic chemistry lab, each experiment includes a section, "Applying Scientific Methodology," intended to help the student understand the problem, formulate a meaningful hypothesis, and solve the problem. The Introduction and Experiment 1 describe in some detail how the student can apply scientific methodology to the solution of a problem, so students must read at least pages 2-5 of the Introduction and should be asked to read the relevant parts of Experiment 1, even if you choose not to assign it. Because each experiment is designed as a problem for the student to solve, the outcome is not explicitly stated in the experiment itself. In a few experiments, such as Experiments 30 and 42, the identity of an organic reactant is unknown as well. Therefore, it is imperative that the instructor or laboratory coordinator obtain a copy of the Instructor's Manual (ISBN 0-13-033353-0), which is provided free of charge by Prentice Hall to adopters of this book.

Part III contains a number of minilabs to provide additional flexibility. These short experiments can be used to fill in those gaps in a lab course when, for example, the students finish a two-period experiment during the first hour or so of the second period. They can also be used to teach techniques (such as paper chromatography in Minilab 9) that are seldom used in the major experiments or to introduce additional theoretical topics, such as photochemistry (Minilab 24). Part IV is a self-contained introduction to qualitative organic analysis, which is also incorporated into some of the Part II experiments, particularly Experiments 37 and 47. Part V contains detailed descriptions of the laboratory operations, which are flagged in the experiments by operation numbers in brackets, such as OP-30.