Items related to Literature of the Western World, Volume I: The Ancient...

Wilkie, Brian; Hurt, James Literature of the Western World, Volume I: The Ancient World Through the Renaissance (5th Edition)

Literature of the Western World, Volume I: The Ancient World Through the Renaissance (5th Edition) 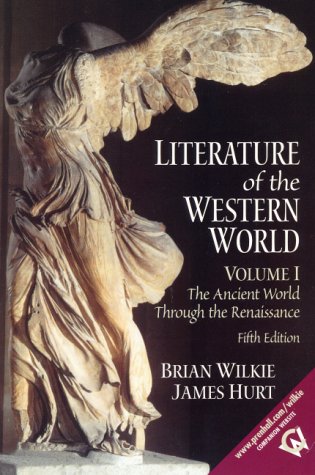 The most comprehensive best-selling anthology of its kind, this two-volume survey enables readers to choose among the most important canonical and less-familiar texts of the Western literary tradition in Europe and the Americas. It offers complete texts whenever possible, uses the best translations of foreign-language material, and, when appropriate, presents more than one text by each author. It provides detailed historical and biographical notes and introductions to six literary periods: The Ancient World; the Middle Ages; the Renaissance; Neoclassicism and Romanticism; Realism and Naturalism; and Modern and Contemporary. Individuals interested in a comprehensive look at Western literature through the ages.

This fifth edition of Literature of the Western Worldintended, as its predecessors were, to provide the best possible materials for courses in the literatures of Europe and America from the earliest times to the present. It is a textbook in the broad sense of "a book of texts," rather than in the narrow one of a book arranged along the lines of a single course. It is a small library of Western literature upon which a wide range of courses might be based and which students might preserve after a particular class is over as a useful part of their personal libraries. Through the successive incarnations of the book, the editors have clung to a quite personal conception of their roles as participants in a conversation with instructors and students who use the book, and they have made choices of texts and presentation accordingly.

Even within Western literature, two volumes, thick as they are, can include only a tiny fraction of the most highly regarded and most influential works. The editors have adopted principles of both balance and range in making their hard choices. The text goes from about 2000 B.C. to 2000 A.D., and the editors have tried to represent the earlier periods as fully and fairly as the later ones. The temporal range and balance are matched by a range and balance of literary modes. If the works included were divided into the modes of lyric, narrative, and drama, the result would be three substantial anthologies of poems, stories, and plays. The national literatures within the boundaries of the subject have been represented in a balanced way as well, as far as possible. Balance, too, has been the goal in the representation of "high" and "low" literature (both Oedipus Rex and Aesop's Fables) and literature by women and men (Marguerite de Navarre as well as Boccaccio, Anna Akhmatova as well as Rainer Maria Rilke).

The way the texts are presented has been as important to the editors as their selection. The editors are aware that most students who use Literature of the Western World are encountering the works in it for the first time. Therefore, they try to make the initial encounter as rich and meaningful as possible. This means that translations of works in languages other than English must be carefully chosen, not only for accuracy but also for readability and, above all, for capturing the literary quality of the original as vividly as possible. Robert Fitzgerald's translations of the Iliad and the Odyssey, the longest selection from a single author in the anthology, achieve these goals, as do Robert Fagles's and Phillip Vellacott's translations of Greek tragedy, H. R. Huse's translation of the Divine Comedy, Louise and Aylmer Maude's translations of Tolstoy, and Stephen Mitchell's translations of Rilke. In a number of cases, we have been able to include translations by distinguished writers in their own right. Thus the Irish poets Thomas Kinsella and Derek Mahon translate the Irish Tain and the poems of Gerard de Nerval; the American poets Henry Wadsworth Longfellow, William Cullen Bryant, W. S. Merwin, and Denise Levertov translate some of the Renaissance lyrics; Marianne Moore and Richard Wilbur translate La Fontaine and Moliere respectively; and Randall Jarrell translates Faust. The great English novelist Tobias Smollett translates Voltaire, his contemporary; and D. M. Thomas translates both Alexander Pushkin and Anna Akhmatova. Such pairings of congenial temperaments often result in happy blendings that read like original works.

Introductions and annotations are also intended to help the student feel at home in the often remote and unfamiliar worlds of the writers. Extensive period introductions survey historical events and provide syntheses of the thematic and aesthetic preoccupations of each period. Detailed introductions to individual authors and works place each work in the context of its author's life and times and suggest what to look out for in a first reading without giving away the content or imposing a single interpretation. Annotations are economical and factual rather than interpretive but ample enough to minimize trips to the dictionary or encyclopedia.

The fifth edition retains much from the previous editions, especially texts that instructors told us were especially important in a course in Western literature, but it also includes a great deal of new material. The most striking innovation is perhaps the sections of "Cultural Texts" for each period. These are made up of selections that, though they may have considerable literary value themselves, are likely to be read principally for their ideas rather than their literary merits. A few of these are works of literary theory, such as Aristotle's Poetics, Boileau's Art of Poetry, and the selection from Raymond Williams's The Long Revolution. Most, though, are works of philosophy, history, political science, and other nonliterary fields that express directly some of the ideas that poets, storytellers, and playwrights express indirectly. A total of forty-three of these cultural texts appear in the two volumes as illuminating companion pieces to the works of literature proper.

A second structural change is not strictly new but represents an expansion of features of the earlier editions: a number of sections of lyric poetry in both volumes, a series of minianthologies within the anthology. The fourth edition included such a section of French Symbolist and Modernist Poetry. This edition adds similar sections of Greek and Latin Lyric Poetry, Renaissance Lyric Poetry, and Romantic Lyric Poetry. Some of the poets included in these sections appeared separately in previous editions; placing them in the contexts of their contemporaries considerably enriches our reading of them.

A third new feature of the book is greater attention to popular literature. There is a temptation in compressing all of Western literature into two volumes to focus on the most heroic works, often aristocratic in origin. But the "high" literature of the West has always been accompanied by the "low," and we have tried to acknowledge its presence by including such popular forms as folktales, beast fables, and tales of wonder throughout the two volumes. Thus in Volume I Aesop's fables follow the Odyssey, the medieval beast-epic Renard the Fox follows the Lais of Marie de France, and the Thousand and One Nights follows the Divine Comedy. Folk tales in sophisticated retellings appear near the beginning and near the end of Volume II, in La Fontaine's suave, ironic Fables and Calvino's Italian Folktales, in which folk tradition meets postmodernism.

A number of other changes are local rather than structural. Euripides's extraordinary Helen is a metaplay that forms a good companion piece not only to the horrific Medea but also to Homer's account of Helen in the Iliad and the Odyssey. Beowulf has given way to a selection from the Irish national epic The Cattle Raid of Cooley and an Icelandic saga. Strong recent postcolonialist readings of Shakespeare's The Tempest led us to substitute it for Henry IV, Part 1 (though postcolonial themes are not absent from that play, either).

Changes in Volume II are just as extensive. Diderot's Rameau's Nephew is a hilarious, unsettling counter-voice to the Enlightenment texts grouped with it. Pushkin's The Bronze Horseman is a better sample of Pushkin than The Queen of Spades, since it is for his poetry that the Russians chiefly treasure him. Balzac's Colonel Chabert strengthens our representation of nineteenth-century French fiction. Tolstoy's The Kreutzer Sonata has replaced The Death of Ivan Ilyich as a better example of the interesting complexities and conflicts of Tolstoy's thought and art. The twentieth century has been bolstered by the addition of the poems of Rilke and Akhmatova and of Eliot's The Waste Land, by Sartre's No Exit, and by Richard Wright's The Man Who Lived Underground. As a conclusion (for the moment) to four thousand years of literary history the editors have chosen Chinua Achebe's Things Fall Apart, a wonderful novel which, set in Nigeria but drawing on the full resources of the European novel, connects the literature of "the Western world" to the rest of the world, a significant note on which to begin a new century and a new millennium.

Among the participants in the ongoing conversation that resulted in this book are friends who took an active part in planning and advising on this edition. They include the following: Randy Malamud, Georgia State Univ

This first volume of a two-volume survey allows students and instructors to choose among the most important canonical and less familiar texts of the Western literary tradition in Europe and the Americas.

Prentice Hall's exclusive Companion Website™ that accompanies both volumes of Literature of the Western World offers tools and support that make it easy for students and instructors to integrate this online study guide with the text. This site is a comprehensive resource that is organized according to the chapters within the text and features a variety of learning and teaching modules:

The Companion Website™ makes integrating the Internet into your course exciting and easy.

1. Literature of the Western World, Volume I: The Ancient World Through the Renaissance (5th Edition)

2. Literature of the Western World, Volume I: The Ancient World Through the Renaissance (5th Edition)

3. Literature of the Western World, Volume I: The Ancient World Through the Renaissance (5th Edition)

4. Literature of the Western World, Volume I: The Ancient World Through the Renaissance (5th Edition)