Items related to Psychobabble and Biobunk: Using Psychology to Think...

Psychobabble and Biobunk: Using Psychology to Think Critically about Issues in the News (2nd Edition) 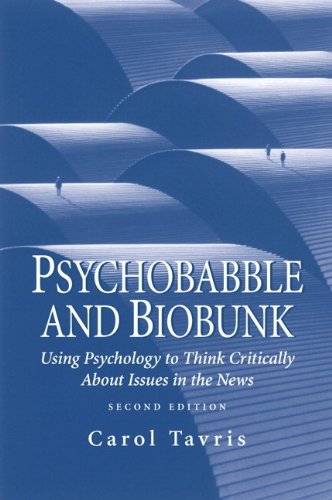 This selection of opinion essays and book reviews by Carol Tavris--written for The Los Angeles Times, The New York Times, Scientific American, and other publications--applies psychological research and principles of scientific and critical thinking to issues in the news. As readers work their way interactively through the essays--thinking through the author's position and their own on the various issues, they engage and strengthen their critical thinking skills--e.g., asking questions and wondering; defining terms; examining the evidence; analyzing assumptions and biases--one's own and those of others; avoiding emotional reasoning; not oversimplifying; considering other interpretations; and tolerating uncertainty. Focuses on important areas such as Science vs. Pseudoscience, Controversies in Child Development, The Politics and Science of Gender Research, Applying Psychology to Social Issues, and Mental Disorder and Treatment. Individual essay topics include, for example, The Popularity of Predictions; Thinking Critically About Alternative Medicine; Thinking Critically About Mystical Messages; The Working Mother Debate; How Much Influence Do Mothers Have?; How Much Influence Do Parents Have?; How Critical Are the First Years of Life?; The Interpretation of Differences; The Paradox of Gender; Biological Politics and the Study of Gender; Emotional Epidemics and Their Consequences; The Daycare Sex-abuse Scandals; Adolescent Violence; The Limits of Medication; and Thinking Critically About Psychotherapy. For anyone who wants to explore the psychological basis of current popular culture issues and to engage in, and strengthen, the critical thinking skills.

This revised and updated handbook features a selection of opinion essays and book reviews by Carol Tavris, written for The Los Angeles Times, The New York Times, Scientific American, and other publications. These essays, which apply psychological research and principles of scientific and critical thinking to issues in the news, may be used to encourage debate in the classroom or as a basis for student papers. Students can be asked to write or present their own points of view on a topic, drawing on research and the guidelines of critical thinking (defined and described in a prefatory "Note to the Reader") to support their conclusions. Although these essays can be used in many social science and composition courses, a "Note to the Instructor" suggests how their specific topics correspond to material in Carole Wade and Carol Tavris's Psychology and Invitation to Psychology and Tavris & Wade's Psychology in Perspective.

CAROL TAVRIS earned her Ph.D. in social psychology at the University of Michigan, and her career as a writer, lecturer, and teacher has been devoted to educating the public about the importance of scientific and critical thinking in psychology, with a special focus on gender issues. She is author of The Mismeasure of Woman: Why women are not the better sex, the inferior sex, or the opposite sex, which won the Distinguished Media Contribution award from the American Association of Applied and Preventive Psychology, and of Anger: The misunderstood emotion. She is co-author, with Carole Wade, of Psychology, Invitation to Psychology, and Psychology in Perspective. Dr. Tavris has given numerous addresses and seminars on, among other topics, social science literacy, gender research, critical thinking, anger, and the science and politics of the biomedical revolution. She has taught in the psychology department at UCLA and is a Fellow of the American Psychological Association and the American Psychological Society.

3. Psychobabble and Biobunk: Using Psychology to Think Critically about Issues in the News (2nd Edition)